Ex-Tropical Cyclone Anika continues to track across the northwest Kimberley and is likely to redevelop off the west Kimberley coast early Tuesday.
Areas Affected:
Warning Zone
Mitchell Plateau to Broome, including Cape Leveque and Derby, not including Broome.

None.
Details of Ex-Tropical Cyclone Anika at 11:00 am AWST:

Location: within 35 kilometres of 15.8 degrees South 125.0 degrees East, estimated to be 65 kilometres southeast of Kuri Bay and 380 kilometres northeast of Broome.

Movement: southwest at 12 kilometres per hour.

GALES with gusts to 100 kilometres per hour are expected along the Kimberley coast between Mitchell Plateau and Cape Leveque today. These GALES may extend further west to Beagle Bay and nearby areas north of Broome overnight Monday.

GALES with gusts to 100 kilometres per hour are expected to develop further west along the west Kimberley coast during Tuesday, possibly extending as far west as Pardoo Roadhouse later on Tuesday.

DESTRUCTIVE winds with gusts to 140 kilometres per hour may develop across the north of the Dampier Peninsula, including Cape Leveque and Beagle Bay, during Tuesday if the system takes a more northerly track than forecast.

HEAVY RAINFALL is forecast about the Kimberley during Monday and Tuesday as the system tracks near the Kimberley coast.
Recommended Action:

YELLOW ALERT - For people in or around Kuri Bay to Derby , not including Derby, you need to take action and get ready to shelter from a cyclone.

BLUE ALERT - For people in or around Derby to Beagle Bay, including Derby, you need to prepare for cyclonic weather and organise an emergency kit including first aid kit, torch, portable radio, spare batteries, food and water.

Remaining people in the North and West Kimberley Regions are advised to stay up to date with weather warnings and forecasts. 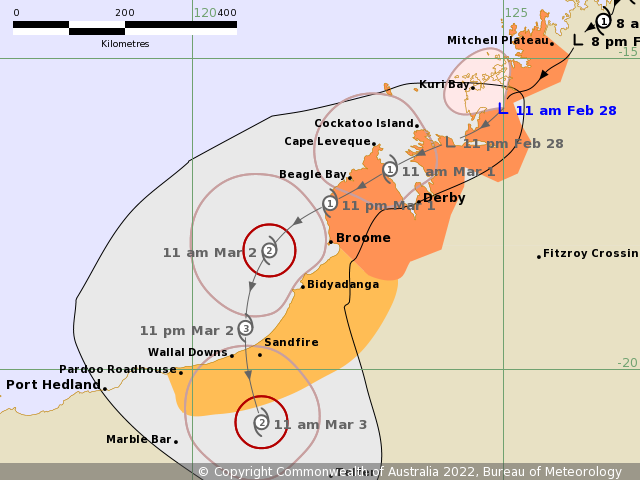