Weather Situation: A low pressure system about 996 hPa is located close to the southern WA coast, with an associated trough extending to the north. The low is expected to weaken today as it moves to the southeast.

DAMAGING WINDS averaging 55 to 65 km/h with peak gusts to around 100 kilometres per hour are possible throughout the South East Coastal district and parts of South Coastal, Great Southern, Goldfields and Eucla districts. The risk is highest near showers and thunderstorms, and along coastal areas in the South East Coastal.

HEAVY RAINFALL is no longer considered a risk in the warning area, though driving conditions may still be dangerous with slippery roads and gusty winds.

The risk of damaging winds will ease during Tuesday morning or early afternoon as the low moves away from the coast.

Locations which may be affected include Esperance, Norseman, Israelite Bay, Lake King, Ravensthorpe and Salmon Gums.

Severe weather is no longer occurring in the Lower West and Central Wheat Belt districts and the warning for these districts is CANCELLED. 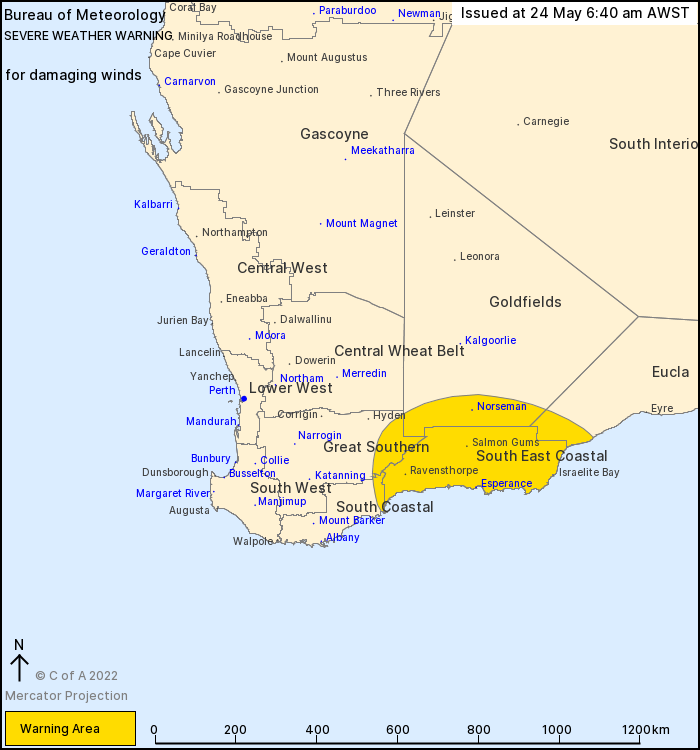