INTENSE RAINFALL FROM DANGEROUS THUNDERSTORMS AROUND ENEABBA AND MORAWA.

Weather Situation:
A humid and unstable airmass to the east of a surface trough near the west coast is expected to produce severe thunderstorms today across central western parts of the state. Thunderstorms are already developing in the warning area, with activity expected to pick up and become more severe throughout the afternoon and evening.

Severe thunderstorms are likely to produce INTENSE RAINFALL that may lead to dangerous flash flooding and damaging winds over the next several hours in parts of the Central West district around Eneabba and Morawa.

Severe thunderstorms are likely to produce heavy rainfall that may lead to flash flooding and damaging winds in the warning area over the next several hours. Locations which may be affected include Meekatharra, Moora, Mount Magnet, Paynes Find, Wongan Hills and Yalgoo.

Mount Magnet recorded 35mm of rainfall in the 2 hours to 3:15pm.

Yuna (northeast of Geraldton) recorded 18mm of rainfall in 20 minutes to 1:38pm.

The Department of Fire and Emergency Services advises that people should:
* If outside find safe shelter away from trees, power lines, storm water drains and streams.
* Close your curtains and blinds, and stay inside away from windows.
* Unplug electrical appliances and do not use land line telephones if there is lightning.
* If there is flooding, create your own sandbags by using pillow cases filled with sand and place them around doorways to protect your home.
* If boating, swimming or surfing leave the water.
* Do not drive into water of unknown depth and current.
* Slow down and turn your headlights on.
* Be alert and watch for hazards on the road such as fallen power lines and loose debris.
* If it is raining heavily and you cannot see, pull over and park with your hazard lights on until the rain clears. 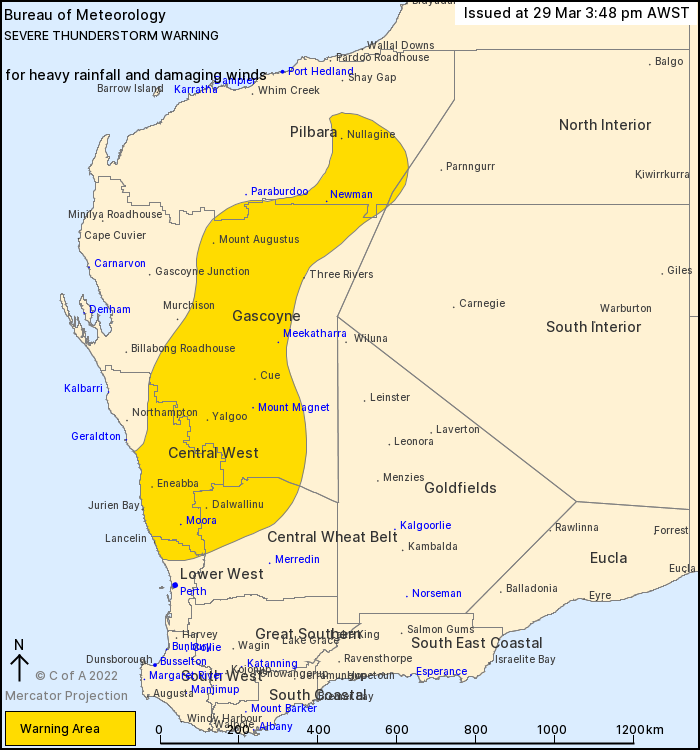