Showers and storms to continue in the eastern parts of the Interior during this week, bringing heavy rain which may trigger flooding impacts. A trough with an embedded low located over central parts of the State will continue to bring unseasonal heavy rainfall in the Central West during the week.

Catchments in the flood watch area are wet with some transport routes closed. Adjacent areas in the Northern Territory are wet with multiple road closures.

Forecast rainfall over the next few days;

Tuesday: 10-25 mm with isolated falls to 30 mm across all listed flood watch areas

Wednesday: Up to 15 mm in the Tanami and Western Deserts. Higher rainfall of 15-30 mm with isolated falls up to 50 mm in the southern parts of the Warburton District Rivers.

Persistent rainfall may cause dirt tracks over the Interior to become muddy and boggy. Roads in the flood watch area may become affected over the next few days.

Catchments likely to be affected include:
Warburton District Rivers

This flood watch is available by dialling 1300 659 213. For more information on the Flood Watch Service visit http://www.bom.gov.au/water/floods/floodWarningServices.shtml
Flood Safety Advice:

DFES advises people and communities to be aware that flooding is possible and be prepared to relocate equipment and livestock. Watch water levels. Travellers need to be aware that road conditions may be adversely affected and travel plans may need to be reconsidered. Do not drive into water of unknown depth and velocity. 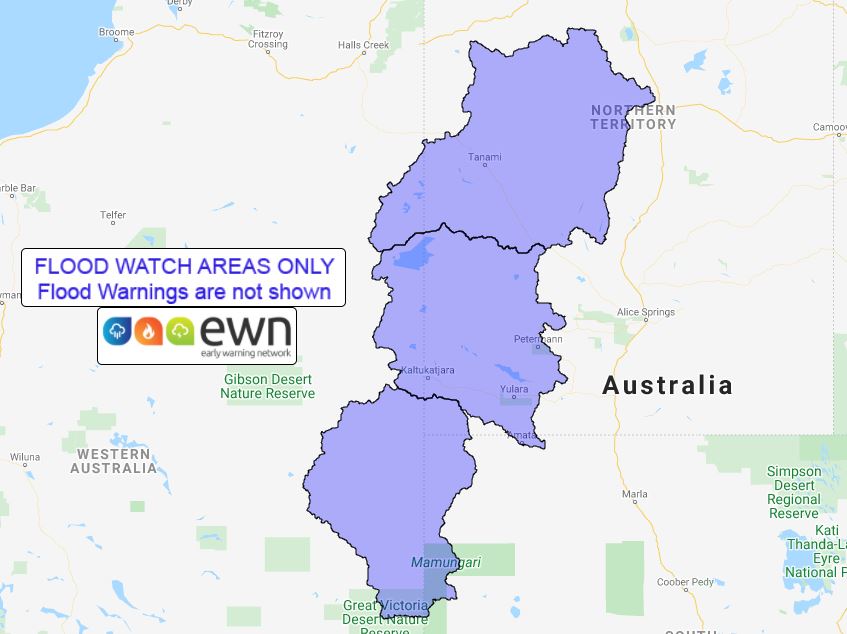