Weather Situation: A low pressure system will intensify over southwestern Victoria today resulting in a vigorous northwest to westerly flow across the State before contracting to the southeast during Friday.

Strong to gale force northwest to westerly winds averaging 60 to 70 km/h with peak gusts of 90 to 100 km/h are likely to develop in the west late this evening. The DAMAGING WINDS will extend eastwards across southern and alpine Victoria in the early hours of Friday morning with the areas impacted highly dependent on the development and exact movement of the low.

North to northwesterly winds over the eastern ranges Friday morning may produce wind gusts of 100 to 120 km/h about the higher peaks.
Thunderstorms are also forecast today and Severe Thunderstorms are a risk during the afternoon. A separate warning for any severe phenomena associated with thunderstorms will be issued as required later today.
Winds are expected to ease over western districts by sunrise Friday, with winds easing over the central and eastern parts of the State during Friday afternoon.

Locations which may be affected include Horsham, Warrnambool, Seymour, Maryborough, Ballarat, Geelong, Melbourne, Traralgon and Bairnsdale. 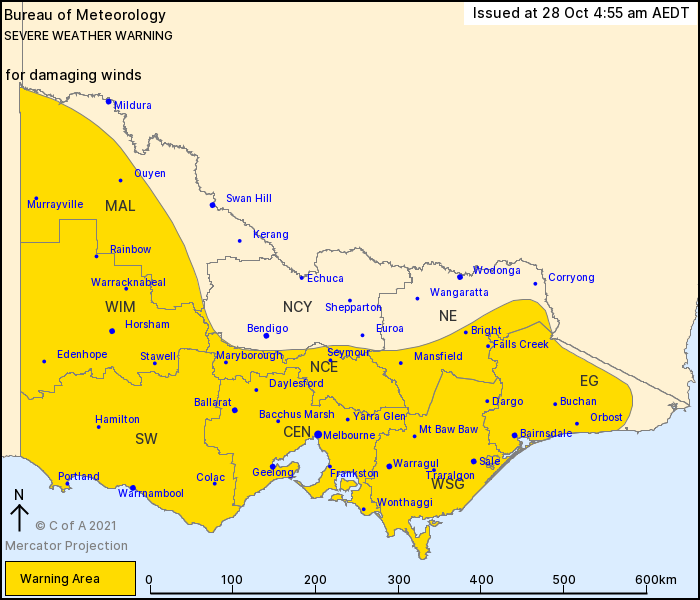