Weather Situation: A cold front over the southwest of the State will continue to move rapidly east today . A strong upper atmospheric system will further support thunderstorms near and east of the cold front.

Severe thunderstorms are likely to produce damaging winds over the next several hours in the Central, South West, Northern Country, North Central, West and South Gippsland, Wimmera and parts of the Mallee and North East districts. Locations which may be affected include Horsham, Warrnambool, Bendigo, Shepparton, Seymour, Maryborough, Ballarat, Geelong, Melbourne, Wangaratta and Traralgon.

Severe thunderstorms are likely to produce damaging winds and heavy rainfall that may lead to flash flooding over the next several hours in parts of the East Gippsland, North East and West and South Gippsland districts. Locations which may be affected include Sale, Dargo, Maffra and Mt Hotham.

In southern and central parts of the State, storms with damaging wind gusts are most likely to be associated with a squally wind change cross the State.
The change is due to move up the Surf Coast from 1:00pm, reaching Geelong and Ballarat at approximately 2:00pm, Melbourne at 3:00pm, and the eastern suburbs around 3:30pm.
Peak gusts are likely to reach 110km/h with the wind change, although higher gusts are also possible. 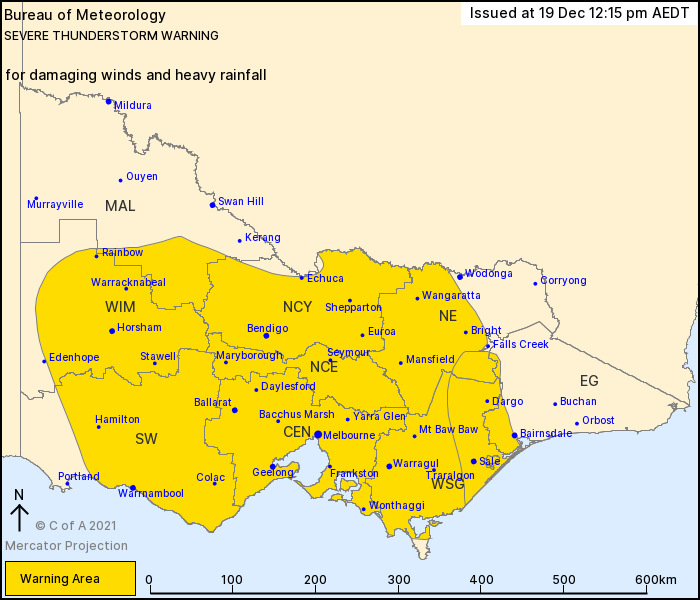