Weather Situation: A low pressure system is forecast to develop off the east coast of Tasmania later today, before moving over Tasmania during Friday. A very moist and vigorous southeasterly airstream will build across eastern and southern Tasmania late today, bringing damaging winds and heavy rainfall. Severe weather will likely continue into Friday and gradually ease as the low moves over the state. The low is then forecast to redevelop over Bass Strait later on Friday and begin to move away eastwards from Tasmania late on Saturday.

HEAVY RAINFALL which may lead to FLASH FLOODING is forecast for the southeastern half of Tasmania from this evening, including the East Coast, South East and Upper Derwent Valley districts, and parts of the Midlands, Central Plateau and Western districts. Six-hourly rainfall totals between 40 to 60mm are likely. Heavy rainfall is expected to contract south and west of Hobart by Friday afternoon and then ease during Friday evening.

Locally INTENSE RAINFALL which may lead to DANGEROUS AND LIFE-THREATENING FLASH FLOODING is also possible with thunderstorms over parts of the East Coast and South East districts during this period, with six-hourly rainfall totals of 80 to 100mm.

Strong southeasterly winds averaging around 50 km/h with DAMAGING WIND GUSTS of around 80 km/h are possible over eastern and southern districts from late today, including parts of the East Coast, Upper Derwent Valley, South East and Western forecast districts. Winds are expected to contract south and west of Hobart by early Friday afternoon and then ease.

Flood Warnings and a Flood Watch have been issued for catchments in the north, east and southeast. See http://www.bom.gov.au/tas/warnings/ for more information.

Severe weather is no longer expected in the North East district and the warning for this district is CANCELLED.

The State Emergency Service advises that people should:
* Supervise children closely.
* Check that family and neighbours are aware of warnings.
* Manage pets and livestock.
* Secure outdoor items including furniture and play equipment.
* Be prepared in case of power outages and report any outages to TasNetworks on 132 004.
* Beware of damaged trees and power lines and take care when driving.
* Clear drains and gutters on premises prior to severe weather arriving.
* Do not walk, ride or drive through flood waters.
* Listen to the ABC radio or check www.ses.tas.gov.au for further advice.
* For emergency assistance contact the SES on 132500. 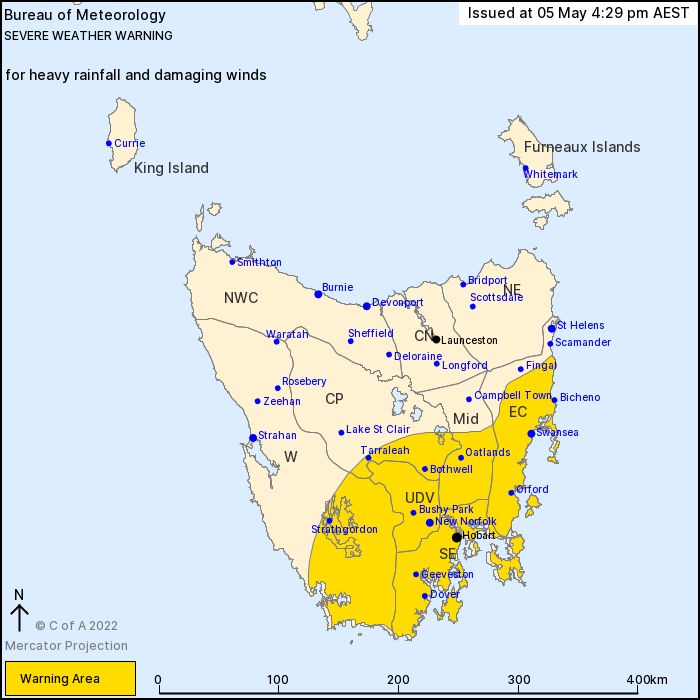