Weather Situation: Strong and gusty northwesterly winds will precede a cold front to cross Tasmania Sunday afternoon, with a west to northwesterly stream to follow and gradually moderate.

DAMAGING WINDS, averaging 60 to 70 km/h with peak gusts up to 100 km/h are possible over northern and eastern Tasmania today.

The strongest winds are expected to contract to the northeast during the afternoon, then slightly ease before tending northwesterly again ahead of another front on Monday, bringing a colder southwesterly change in its wake.

Locations which may be affected include Devonport, Burnie, Whitemark, St Helens, Swansea and Bicheno.

Severe weather is no longer occurring in the Western, South East and Central Plateau districts and the warning for these districts is CANCELLED.

Northwesterly winds meaning over 60 km/h have been recorded at King Island and Devonport airports.

The State Emergency Service advises that people should:
* Supervise children closely.
* Check that family and neighbours are aware of warnings.
* Manage pets and livestock.
* Secure outdoor items including furniture and play equipment.
* Be prepared in case of power outages and report any outages to TasNetworks on 132 004.
* Beware of damaged trees and power lines and take care when driving.
* Listen to the ABC radio or check www.ses.tas.gov.au for further advice.
* For emergency assistance contact the SES on 132500. 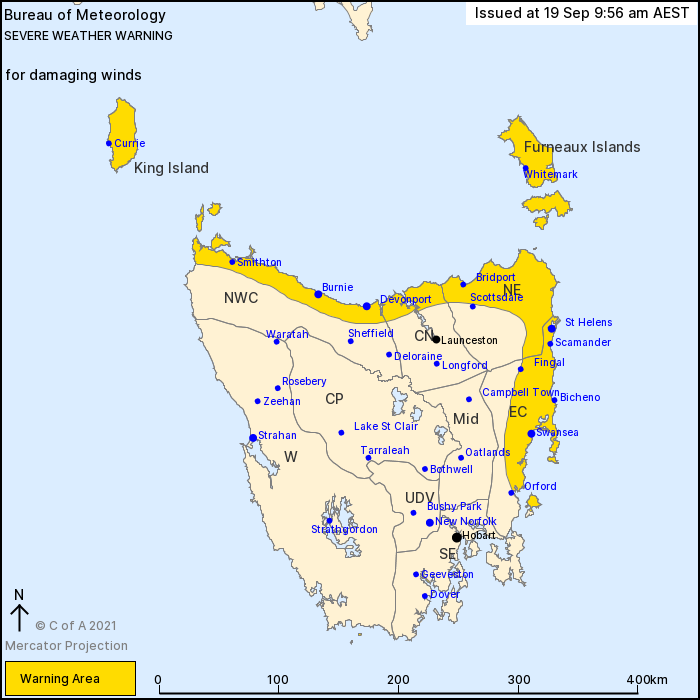