Heavy to locally intense rainfall continuing across central and northern parts of South Australia this weekend.

Weather Situation: An upper level low is forecast to remain slow-moving over the Great Australian Bight this weekend. A surface trough is also expected to move slowly eastward over central parts of the state with broad instability and deep tropical moisture to its east.

INTENSE RAINFALL which may lead to dangerous and life-threatening flash flooding is forecast for the east of the Eastern Eyre Peninsula, southwest of the Flinders, west of the Mid North and northern Yorke Peninsula.

HEAVY RAINFALL which may lead to FLASH FLOODING is expected to continue over the remainder of the warning area.

Widespread rainfall totals between 20 to 60mm are expected across the warning area today and through Sunday with heavier falls between 60 to 120mm. Localised falls in excess of 120mm are possible.

A separate Severe Thunderstorm Warning will be issued if significant thunderstorms develop. Refer to these warnings for more detail.

A Flood Watch is also current for this event.

Locations which may be affected by intense rainfall include Whyalla, Port Augusta, Port Pirie and Kadina.

Locations which may be affected by heavy rainfall also include Port Lincoln, Kingscote, Clare, Roxby Downs,Leigh Creek and Moomba.

Locations which may be affected include Whyalla, Port Augusta, Port Pirie, Maitland, Kadina and Quorn. 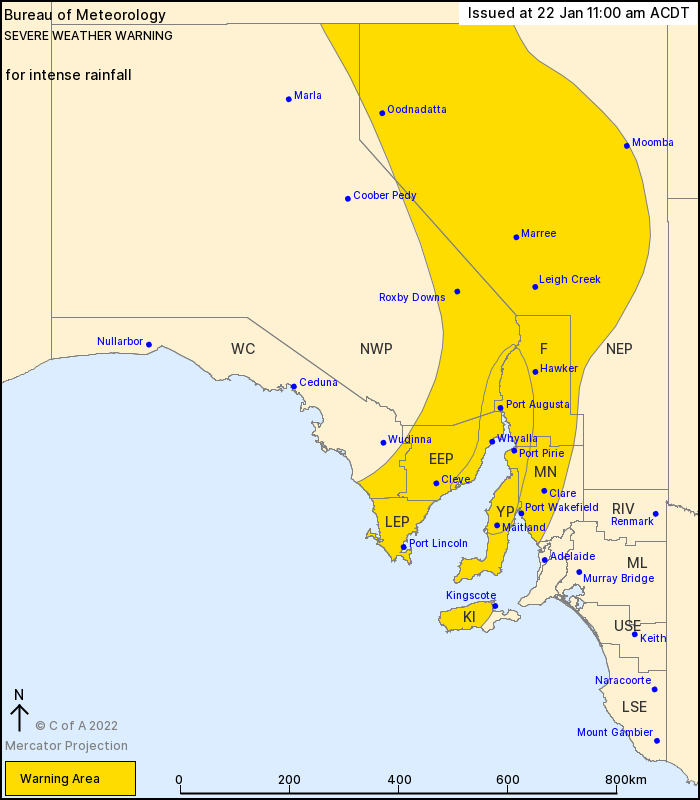