For people in Eastern Eyre Peninsula and parts of West Coast districts.

Heavy rain and storms over the Eyre Peninsula today

Weather Situation: An upper trough approaching Eyre Peninsula will interact with the humid airmass over the state causing enhanced rainfall and thunderstorms.

HEAVY RAINFALL which may lead to FLASH FLOODING has developed in the early hours of this morning across the Eyre Peninsula and eastern parts of the West Coast, and is forecast to continue through the remainder of the morning as it contracts east.

Six-hourly rainfall totals of around 30 to 50mm are forecast, with localised higher rainfall rates possible with thunderstorms.

Rainfall rates have currently eased over the Lower Eyre Peninsula, with higher falls contracting to the northeast this morning.

HEAVY RAINFALL is forecast to ease Wednesday afternoon, but localised thunderstorms may redevelop during the afternoon, and a Severe Thunderstorm Warning may be issued this afternoon if required.

Locations which may be affected include Wudinna, Cleve and Kimba.

Severe weather is no longer occurring in the Lower Eyre Peninsula district and the warning for this district is CANCELLED.

Significant rainfall observations for this event up to 10:00am: 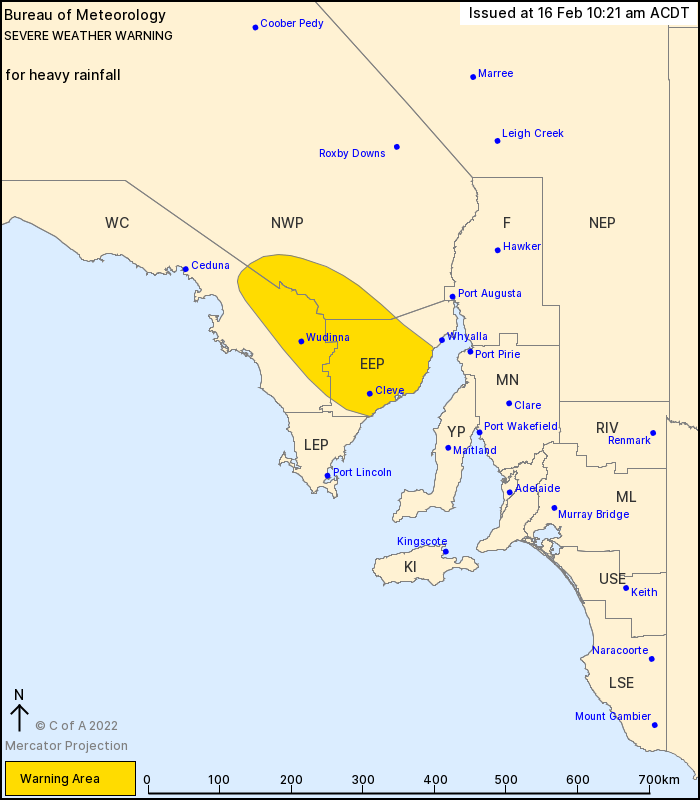