HEAVY RAINFALL AND GUSTY WINDS, EASING FROM THE WEST.

HEAVY RAINFALL which may lead to FLASH FLOODING across the southern parts of the warning area, before easing from the west later Thursday as the low moves eastwards.

Thunderstorms are also possible across parts of the warning area.

Damaging winds, averaging 55-65 km/h with peak gusts of around 90 km/h, are also possible across western and northern parts of the warning area, easing from the west later Thursday.

Note a separate Flood Watch is also current for broad areas of the north and west of SA.

Locations which may be affected include Oodnadatta, Coober Pedy, Leigh Creek, Woomera, Clare and Jamestown.

Winds averaging 50-60 km/h have been observed at Oodnadatta and Marree this afternoon.

Widespread rainfall of 20-40 mm has been observed over parts of the agricultural area and pastoral districts. The highest fall to 9am this morning was 53 mm at Eagle View, just east of Ceduna. Since 9am 26 mm has fallen at Kadina. 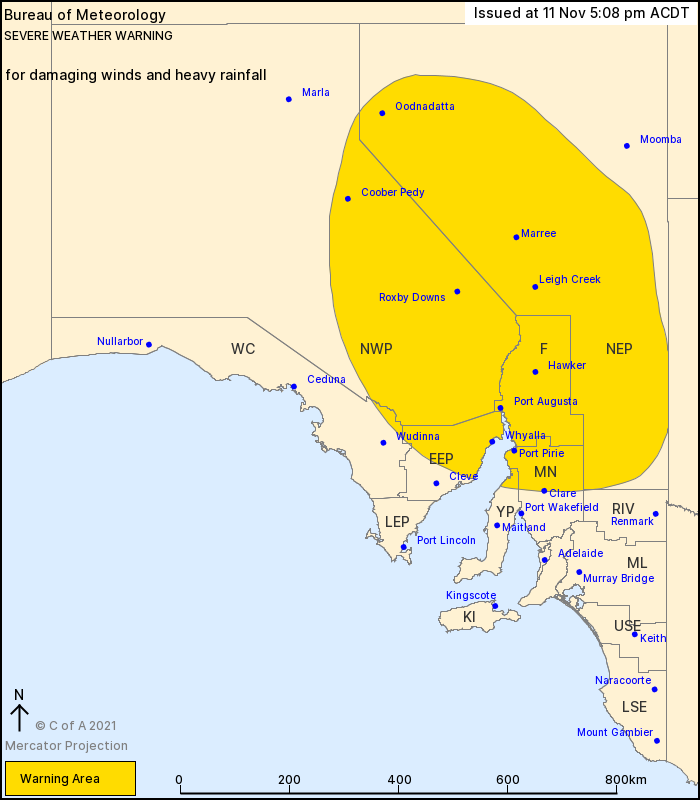