Thunderstorms over the south and east of the state.

Weather Situation: Thunderstorms over the northeast and also about southern districts, associated with a deepening low pressure system.

Severe thunderstorms are likely to produce damaging wind gusts in excess of 90 km/h over the next several hours in parts of the Flinders and North East Pastoral districts. Locations which may be affected include Hawker, Leigh Creek, Marree, Arkaroola, and Olary.

Severe thunderstorms are likely to produce damaging wind gusts in excess of 90 km/h, large hailstones and heavy rainfall that may lead to flash flooding over the next several hours in the Adelaide Metropolitan, Mount Lofty Ranges, Lower Eyre Peninsula, Yorke Peninsula, Kangaroo Island and parts of the Mid North, Murraylands and Upper South East districts. Locations which may be affected include Adelaide, Port Lincoln, Maitland, Murray Bridge, Kingscote and Meningie.

Severe thunderstorms are no longer occurring in the West Coast and Eastern Eyre Peninsula districts and the warning for these districts is CANCELLED. 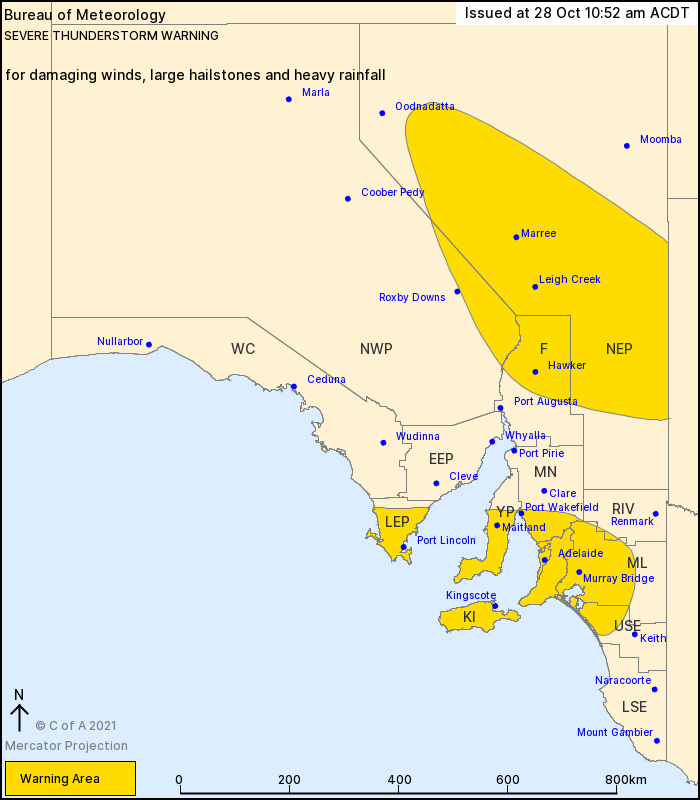