This Flood Watch provides early advice of possible flooding within the specified catchments.
Flood Watch for the Flinders Ranges, Eastern Eyre Peninsula, and parts of the North East and North West Pastoral districts

A broad trough of low pressure over the central parts of the State will slowly move eastwards on Tuesday and Wednesday. Heavy falls are possible with thunderstorms over central and eastern parts of the state during Tuesday.

Catchments are relatively wet following recent showers and storms, particularly in the areas of heaviest rainfall.

In the 24 hours to 9:00 am Tuesday, rainfall totals up to 48 mm (Yudnapinna) have been recorded across the flood watch area.

Rainfall totals of 5-20 mm are forecast for next few days, with isolated higher falls possible with thunderstorms.

Heavy rainfall across the flood watch area has caused damage to several roads particularly the far north and Eyre Peninsula. Some roads are closed and local communities may be isolated.

Catchments likely to be affected include:
Flinders Ranges Rivers and Creeks

No further flooding is expected in the Broughton River, Lower Eyre Peninsula, Yorke Peninsula catchments, however flooding impacts may continue during the next few days. 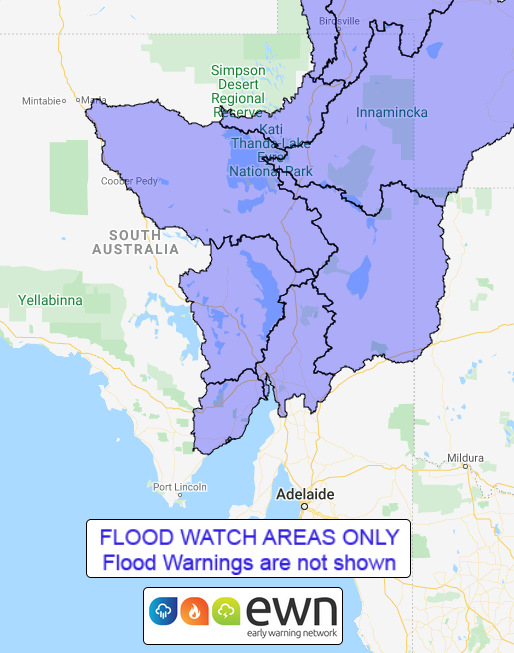