For people in parts of Darling Downs and Granite Belt and Southeast Coast Forecast Districts.

HEAVY RAINFALL which may lead to FLASH FLOODING may occur over areas southeast of Caboolture to Lowood to Warwick tonight and early Tuesday morning. Six-hourly rainfall totals between 80 to 140 mm are possible, reaching up to 180 mm over coastal areas and ranges.

Locally INTENSE RAINFALL leading to DANGEROUS AND LIFE-THREATENING FLASH FLOODING is possible with thunderstorms tonight with six-hourly rainfall totals in excess of 200 mm.

Both heavy and intense rainfall are expected to ease during Tuesday morning.

Flood Watches and Warnings are current for parts of southern Queensland, refer to www.bom.gov.au/qld/warnings/

Locations which may be affected include Gold Coast, Brisbane, Caboolture, Coolangatta, Boonah, Ipswich and Redcliffe.

Rainfall reported since 9am: 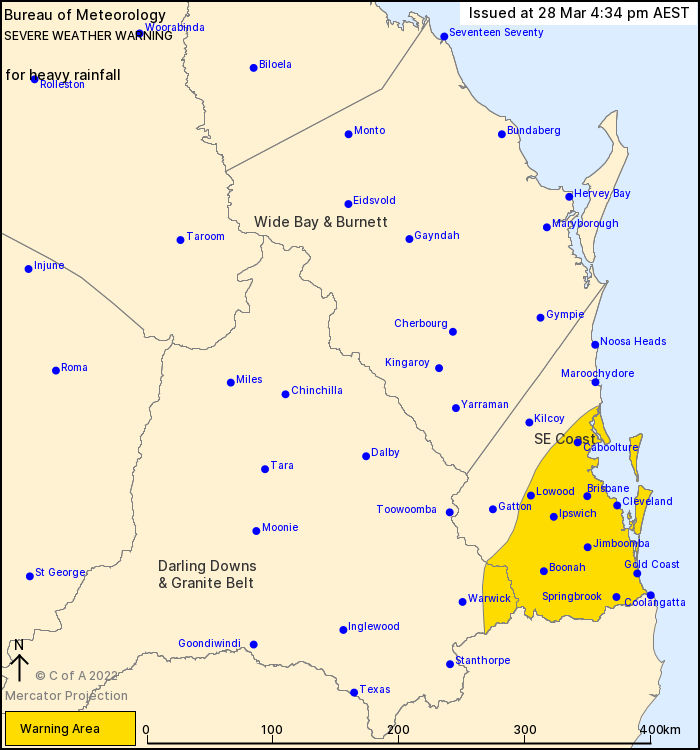