For people in parts of Central Highlands and Coalfields, Capricornia, Wide Bay and Burnett and Darling Downs and Granite Belt Forecast Districts.

Issued at 4:05 pm Tuesday, 30 November 2021.
Heavy rainfall areas continuing across the southeastern interior for the remainder of the day.

Weather Situation: A surface trough over the southern interior has deepened in response to an approaching upper level trough and embedded low. A tropical airmass with abundant moisture is in place ahead of these features.

HEAVY RAINFALL which may lead to flash flooding is expected to continue across the warning area for the remainder of the day. Six-hourly rainfall totals between 50 to 80 mm remain possible until late evening or early Wednesday morning. Isolated heavier falls are also possible with thunderstorms, particularly over northern parts of the warning area.

A Flood Watch and multiple Flood Warnings are current over southern and eastern Queensland. See http://www.bom.gov.au/qld/warnings/ for more information.

Locations which may be affected include Dalby, Biloela, Inglewood, Stanthorpe, Oakey, Baralaba and Moura.

Severe weather is no longer occurring in the Central West and Maranoa and Warrego districts and the warning for these districts is CANCELLED.
Significant 6-hourly rainfall totals: 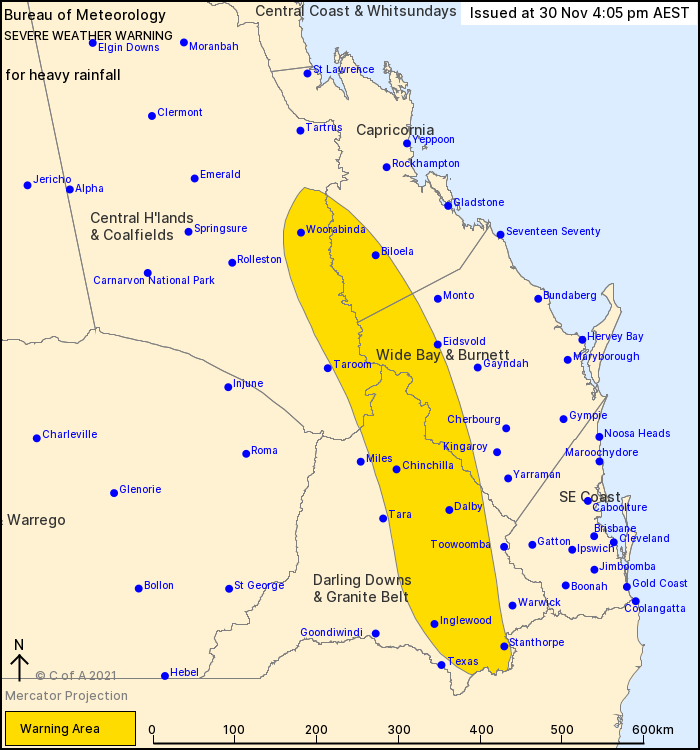