For people in Peninsula and parts of Gulf Country, North Tropical Coast and Tablelands and Northern Goldfields and Upper Flinders Forecast Districts.

Issued at 11:01 am Tuesday, 28 December 2021.
Monsoonal rain and squalls forecast to impact the tropics from early Wednesday morning.

HEAVY RAINFALL which may lead to flash flooding is forecast for areas southwest of Old Mapoon to Lockhart River from early Wednesday morning. Six-hourly rainfall totals between 100 to 120 mm are possible. Locally heavier falls up to 180 mm are also possible over coastal communities about the Gulf coast and may also develop about the east coast north of Port Douglas.

DAMAGING WIND GUSTS, with peak gusts of around 100 km/h are forecast to develop over areas north of about Kowanyama from sunrise on Wednesday and spread eastwards across the northern Peninsula during the day. Locally DESTRUCTIVE WIND GUSTS, with peak gusts in excess of 125 km/h are also possible with thunderstorms. A separate Severe Thunderstorm Warning will be issued if very dangerous storms are detected.

A Flood Watch is also current for parts of the Gulf Country, Cape York Peninsula and North Tropical Coast catchments. For more information on weather warnings in Queensland, refer to http://www.bom.gov.au/qld/warnings/.

Locations which may be affected include Georgetown, Port Douglas, Lockhart River, Weipa, Hope Vale and Napranum.

Queensland Fire and Emergency Services advises that people should:
* Move your car under cover or away from trees.
* Secure loose outdoor items.
* Seek shelter, preferably indoors and never under trees.
* Beware of fallen trees and powerlines.
* Never drive, walk or ride through flood waters. If it's flooded, forget it.
* Keep clear of creeks and storm drains.
* For emergency assistance contact the SES on 132 500. 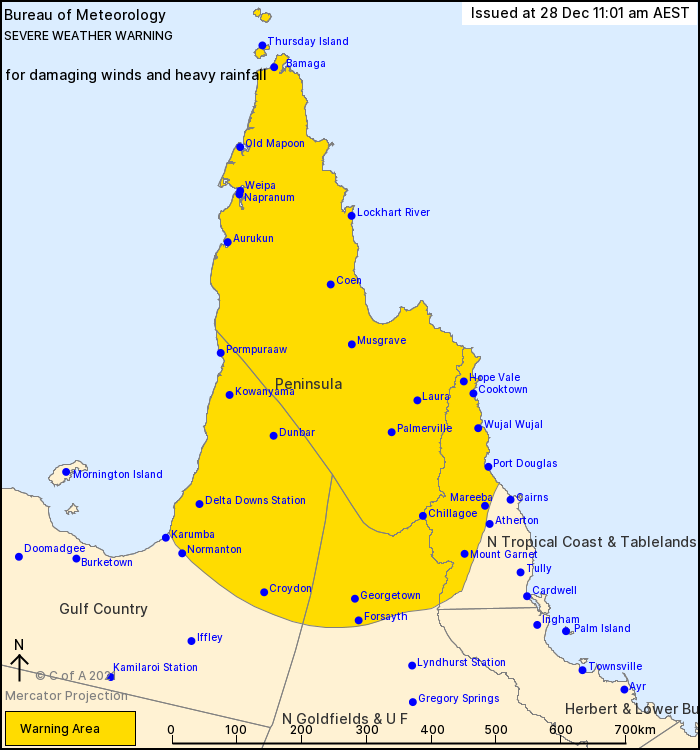