For people in Maranoa and Warrego and parts of North West, Central West, Channel Country and Darling Downs and Granite Belt Forecast Districts.

Issued at 5:40 pm Friday, 29 October 2021.
Scattered thunderstorms, some likely severe, remain active from northwest Queensland to the southern inland, and may develop soon across the western Darling Downs to the NSW border.

Weather Situation: A cold front extending over southern inland and western Queensland is advancing eastwards into an unstable airmass. In addition, strong winds in the upper atmosphere over the southern half of the state will promote severe storm development.

Severe thunderstorms are likely to produce damaging winds in many locations over the next several hours in the Maranoa and Warrego and parts of the Central West, Channel Country and Darling Downs and Granite Belt districts. In addition, a few instances of large hail and heavy rainfall that may lead to flash flooding are possible. Locations which may be affected include Charleville, Goondiwindi, St George, Quilpie, Windorah, Isisford, Bollon, Mitchell, Tambo, Blackall, Stonehenge and Mungindi.

Severe thunderstorms are likely to produce damaging winds over the next several hours in parts of the North West and Channel Country districts. Locations which may be affected include Boulia, Dajarra, Urandangi and Duchess. 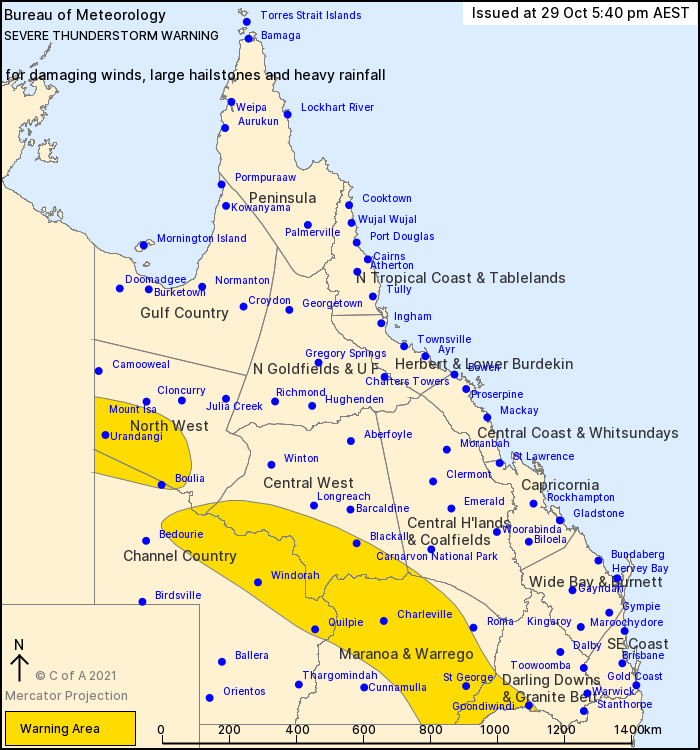