For people in parts of Capricornia and Wide Bay and Burnett Forecast Districts.

Issued at 6:30 pm Tuesday, 19 October 2021.
GIANT HAIL remains possible with cells in the Wide Bay and Burnett and Capricornia districts.

Weather Situation:
Thunderstorms with possible giant hail and damaging winds between about Shoalwater Bay and Gladstone, and between Seventeen Seventy and Double Island Point.
Severe thunderstorms are likely to produce giant hailstones and damaging winds in the warning area over the next several hours. Locations which may be affected include Bundaberg, Gladstone, Rockhampton, Maryborough, Hervey Bay waters, Yeppoon, Childers, Biggenden, Byfield, Gin Gin, Mount Morgan and Tiaro.
Severe thunderstorms are no longer occurring in the Central Highlands and Coalfields district and the warning for this district is CANCELLED.
Hailstones up to 16cm reported earlier from Yalboroo, north of Mackay. 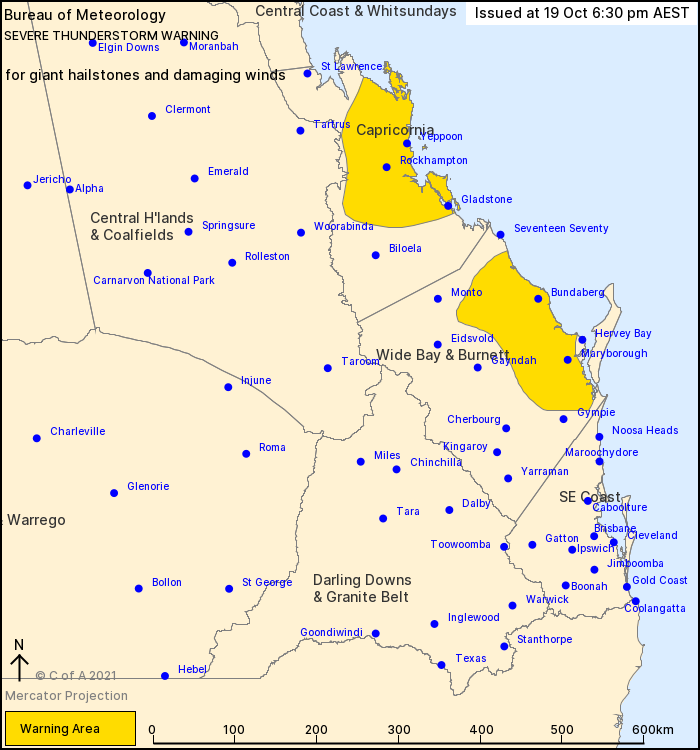