For people in Southeast Coast and parts of North Tropical Coast and Tablelands, Northern Goldfields and Upper Flinders, Herbert and Lower Burdekin and Wide Bay and Burnett Forecast Districts.

Severe thunderstorms over the southeast and northeastern interior.

Weather Situation: Thunderstorms are occurring in a moist and unstable air mass along and east of a surface trough that is currently located over the interior of the state.

Severe thunderstorms are likely to produce damaging winds and large hailstones over the next several hours in the Southeast Coast and parts of the Wide Bay and Burnett districts. Locations which may be affected include Brisbane, Gympie, Ipswich, Jimboomba, Laidley and Lowood.

Severe thunderstorms are likely to produce damaging winds and heavy rainfall that may lead to flash flooding over the next several hours in parts of the North Tropical Coast and Tablelands, Northern Goldfields and Upper Flinders and Herbert and Lower Burdekin districts. Locations which may be affected include Charters Towers and Mingela.

3-4cm hail was recorded around Goondiwindi earlier this afternoon. 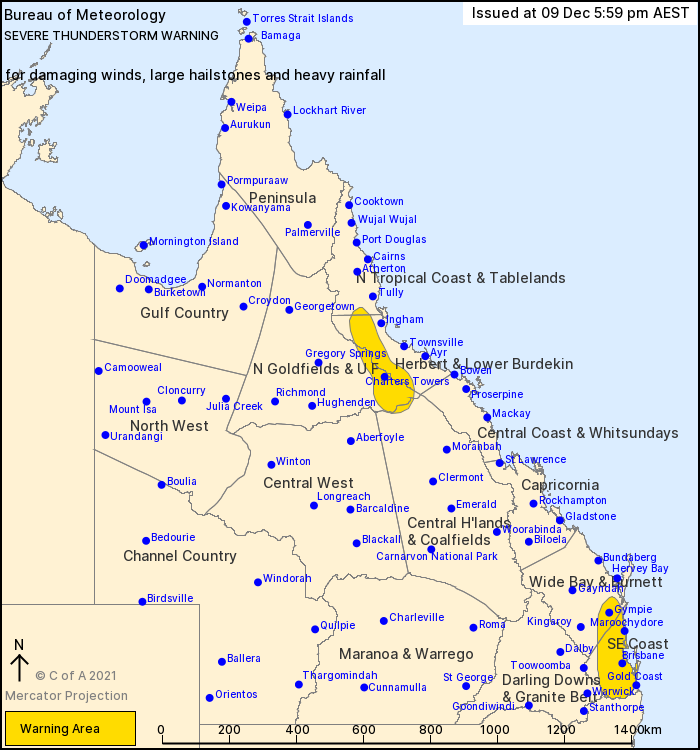