Weather Situation:
Slow moving thunderstorms in a moisture rich environment are triggering on and east of a trough through inland Queensland this afternoon.

Severe thunderstorms are likely to produce damaging winds, large hailstones and heavy rainfall that may lead to flash flooding over the next several hours in parts of the Central Highlands and Coalfields, Central West, Maranoa and Warrego and Darling Downs and Granite Belt districts. Locations which may be affected include Roma, St George, Taroom, Dirranbandi, Injune, Alpha, Surat, Carnarvon National Park and Mungindi.

Severe thunderstorms are likely to produce heavy rainfall that may lead to flash flooding over the next several hours in parts of the Capricornia and Wide Bay and Burnett districts. Locations which may be affected include Kingaroy, Cherbourg, Theodore, Wondai, Murgon, Gayndah, Mundubbera and Eidsvold.

Duaringa west of Rockhampton recorded 68mm of rain in one hour to 1:45pm.

Hawkwood Range west of Gayndah recorded 52mm in the one hour to 2:30pm.

Large hail 3 to 4cm in size was reported at Muckadilla. 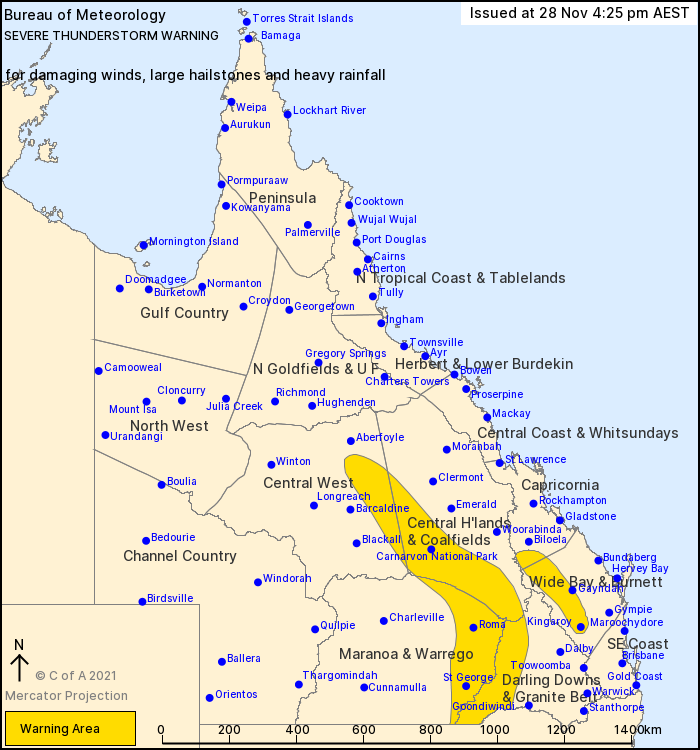