For people in parts of Wide Bay and Burnett, Maranoa and Warrego and Darling Downs and Granite Belt Forecast Districts.

Severe thunderstorms around Mungindi while heavy activity setting up shop around Bundaberg.

Weather Situation: A very moist and unstable airmass is combining with a pre-frontal trough and cold front across central and southern Queensland. A separate coastal trough is also located about the Capricornia coast.

Severe thunderstorms are likely to produce damaging winds and heavy rainfall that may lead to flash flooding over the next several hours in parts of the Maranoa and Warrego and Darling Downs and Granite Belt districts. Locations which may be affected include Mungindi.

Severe thunderstorms are likely to produce heavy rainfall that may lead to flash flooding over the next several hours in parts of the Wide Bay and Burnett district. Locations which may be affected include Bundaberg and Burnett Heads.

Severe thunderstorms are no longer occurring in the Central Highlands and Coalfields district and the warning for this district is CANCELLED. 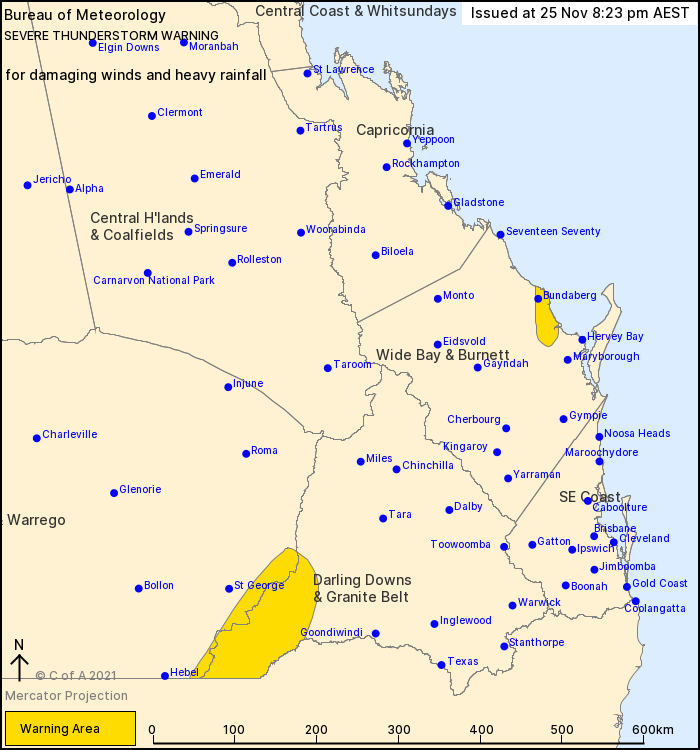