Issued at 5:26 pm Wednesday, 10 November 2021.
Thunderstorms continuing to increase in coverage over central and western parts of the state.

Weather Situation: A very moist and unstable airmass extends across central parts of the state. A slow-moving trough system extending through the Warrego and Maranoa northeastwards to the central coast will act as a focus for thunderstorm development through the afternoon and evening. An upper trough moving across central Australia is leading to the development of severe thunderstorms over western Queensland.

Severe thunderstorms are likely to produce heavy rainfall that may lead to flash flooding and damaging winds over the next several hours in parts of the Central Highlands and Coalfields, Central West, Maranoa and Warrego and Darling Downs and Granite Belt districts. Locations which may be affected include Roma, Emerald, Clermont, Goondiwindi, St George and Mungindi.

Severe thunderstorms are likely to produce heavy rainfall that may lead to flash flooding, damaging winds and large hailstones over the next several hours in parts of the North West and Channel Country districts. Locations which may be affected include Boulia, Dajarra, Urandangi, Glenormiston and Selwyn.

Severe thunderstorms are no longer occurring in the Central Coast and Whitsundays district and the warning for this district is CANCELLED.
93km/h wind gust was recorded at Roma this afternoon.
46mm was recorded in 30 minutes at Isaac River Bridge. 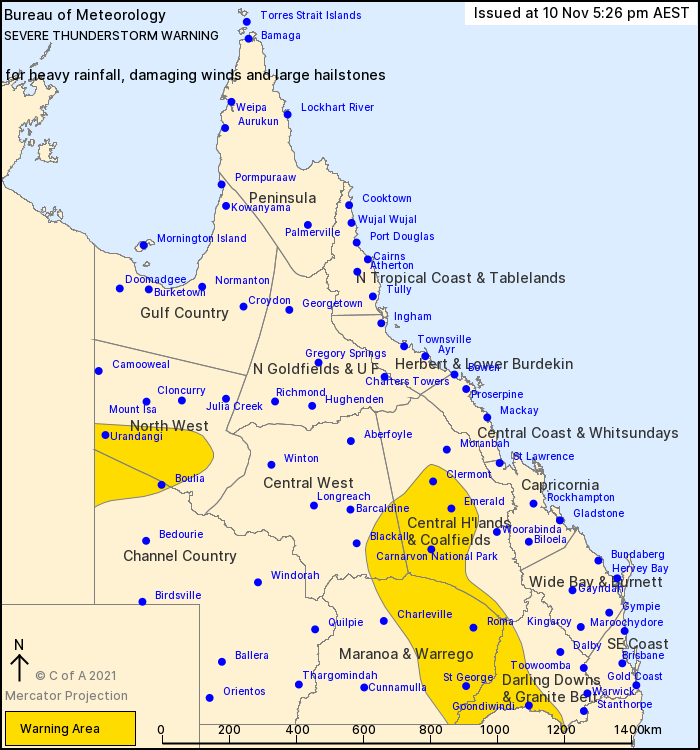