NT/WA Tropical Cyclone Watch: Point Stuart in the NT to the NT/WA border and on to Kalumburu in WA

Watch zone: Point Stuart in the NT to the NT/WA border and on to Kalumburu in WA, including Tiwi Islands and Darwin.

A tropical low is slowly developing to the north northwest of Darwin. It is expected to strengthen and continue moving south past the Tiwi Islands today and most likely move southeast over land on Sunday. Should the system remain off the coast tomorrow it may briefly reach category 1 tropical cyclone intensity. There is a small chance the system tracks over the Joseph Bonaparte Gulf towards the Kimberley.

The system may cross the west coast of the Top End later on Sunday or early Monday, then track east southeast across the Top End.

Hazards:
HEAVY RAIN is likely across the Tiwi Islands, Cobourg Peninsula, northern Daly District and northwest Arnhem District today and tomorrow. Point Stuart has recorded 175 mm of rain in the 24 hours to 9am.

GALES with gusts to 100 km/h may develop between Point Stuart and Wadeye, including Darwin, during Sunday depending on the track of the system.

If the system moves further southwest than forecast, damaging winds may develop on the WA coast east of Kalumburu and adjacent NT coast south of Wadeye overnight tomorrow night and into Monday.

Tides will be HIGHER THAN NORMAL along the north coasts of the Tiwi Islands on today and Sunday, and also between Point Stuart and Wadeye on Sunday.

Recommended Action:
NTES advises:
- Communities under Watch in the NT, including Darwin and the Tiwi Islands, should consider what action they will take should the cyclone threat increase.
- Check your household plan.
- Listen for the next advice.

DFES-State Emergency Service advises that there are no community alerts for WA communities at present.
People between Kalumburu and the WA/NT Border should listen for the next advice. 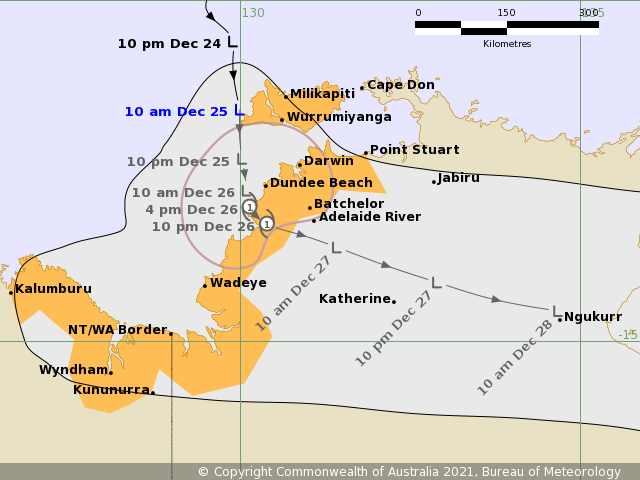