FLOODING EXPECTED IN THE SOUTHERN TERRITORY

A trough will become established near the NT/SA border during Tuesday and move across southern NT during Wednesday, which will continue to causing an outbreak of thunderstorms bringing heavy rain which may trigger flooding impacts.

Rainfall totals of 10-40 mm have been recorded in the flood watch areas during the 24hrs to 9:00 am Tuesday.

Forecast rainfall over the next few days;

Tuesday: 10-40 mm across all listed flood watch areas and parts of the Barkly

Wednesday: 30-45 mm across all listed flood watch areas with up to 70 mm in the Simpson Desert

Later parts of the week the thunderstorm outbreak continues but shifts to central and south eastern areas. The latest forecasts will be updated in subsequent flood watches.

Many roads in the flood watch area are expected to remain affected or become affected over the next few days or week. Some roads may become impacted for an extended period isolating some localities.

Catchments likely to be affected include:
Tanami Desert

More information on the Flood Watch Service and maps of Flood Watch areas are available at www.bom.gov.au/water/floods/floodWarningServices.shtml .
Flood Safety Advice:

The Northern Territory Emergency Service advises that people should: 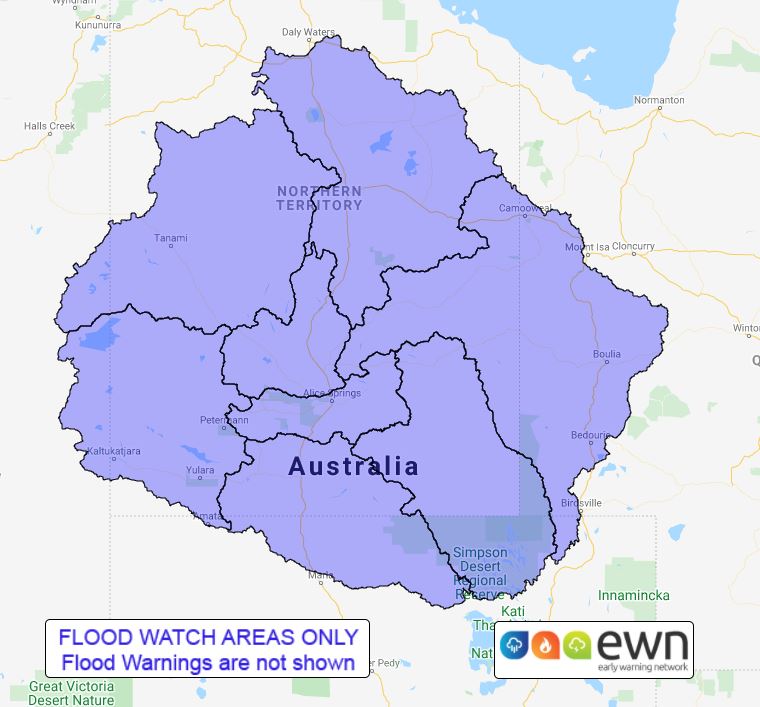