Weather Situation: A strong upper level trough and embedded low is amplifying over central NSW. A coastal trough has deepened near the central coast in response to this upper weather system and is likely to drift a little inland, producing areas of heavy rainfall on its eastern flank. This coastal trough is forecast to weaken during Thursday evening.

Areas of HEAVY RAINFALL which may lead to FLASH FLOODING are occurring about coastal parts of the South Coast, Illawarra, Metropolitan and southern Hunter, and are forecast to extend further inland through these districts to reach the Southern Tablelands and Central Tablelands during this morning and afternoon. Six-hourly rainfall totals between 60 to 100 mm are likely, reaching up to 140 mm over coastal areas.

Intense rainfall rates are generally not expected, however there is a small chance of locally intense rainfall developing around coastal areas north of Wollongong this morning associated with thunderstorm activity. Severe thunderstorm warnings will be issued if this activity eventuates.

Conditions are expected to ease during Thursday evening.

Locations which may be affected include Bega, Batemans Bay, Nowra, Goulburn, Wollongong, Sydney, Katoomba and Gosford. 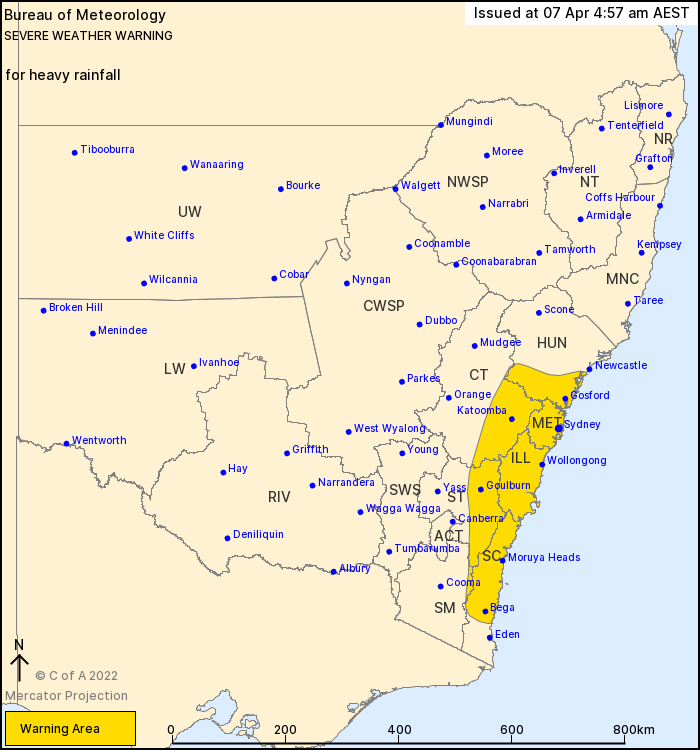