Issued at 10:14 pm Sunday, 21 November 2021.
Heavy rainfall will develop further about the Mid North Coast overnight, easing during the day on Monday.

Weather Situation:
A broad upper low situated near the NSW/Qld border will continue to produce rainfall on its eastern flank overnight, particularly focused around the Mid North Coast. This low will push northwards during the day on Monday, easing rainfall in NSW.

HEAVY RAINFALL which may lead to flash flooding is forecast to develop further in parts of the Mid North Coast overnight, continuing into Monday morning. Three to six hourly rainfall totals of 60-80mm are possible broadly throughout the warning area, with some isolated three to six hourly totals of 80-120mm possible, most likely near the coast. There is also some risk of localised damaging wind gusts in the warning area overnight if a small low pressure centre develops near the coast.
Heavy rainfall will ease in the warning area during late Monday morning.

Locations which may be affected include Port Macquarie, Taree, Kempsey, Bulahdelah, Wingham and Yarrowitch. 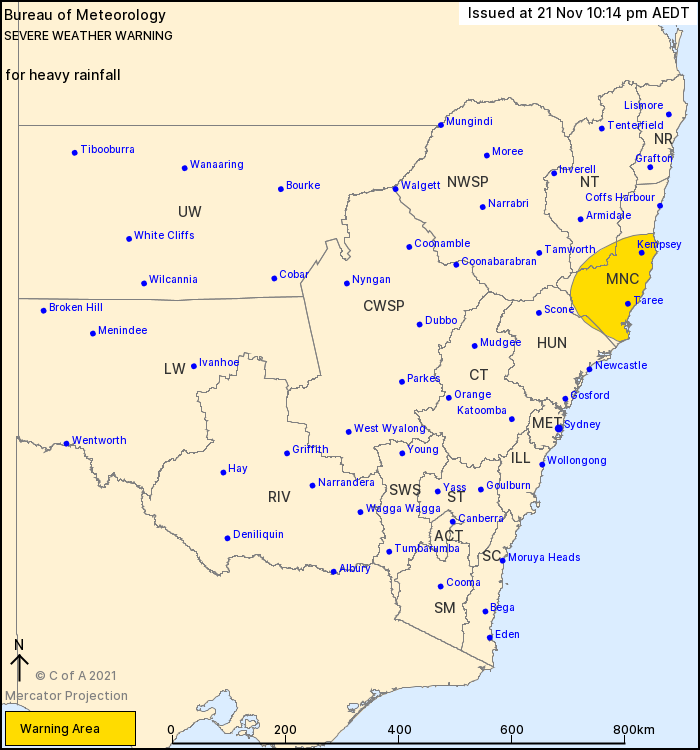