Issued at 4:59 pm Sunday, 21 November 2021.
Heavy rainfall is moving east across the north of the state and expected to start developing about the Mid North Coast and Hunter late this afternoon.

HEAVY RAINFALL which may lead to flash flooding is forecast to continue moving east across the Central West and North West Slopes and Plains during this afternoon and evening, easing later tonight. Three to six hourly rainfall totals of 60-80mm are forecast, with heavier falls possible with any thunderstorm activity in the area.

HEAVY RAINFALL which may lead to flash flooding is also forecast to develop in southern parts of the Mid North Coast and northern parts of the Hunter late this afternoon, continuing overnight into Monday morning. Three to six hourly rainfall totals of 80-120mm are possible. There is also some risk of localised damaging wind gusts in the warning area on Sunday night if a small low pressure centre develops near the coast.
Catchments in the inland areas are wet, with minor flood warnings current for the Macquarie and Namoi rivers, and a minor flood watch current for the Castlereagh river. Refer to current flood warnings at http://www.bom.gov.au/nsw/warnings/

Locations which may be affected include Port Macquarie, Taree, Gunnedah, Narrabri, Walgett and Coonamble.

Severe weather is no longer occurring in the Upper Western district and the warning for this district is CANCELLED.
Bundarra has recorded 87mm over a 6 hour period today. 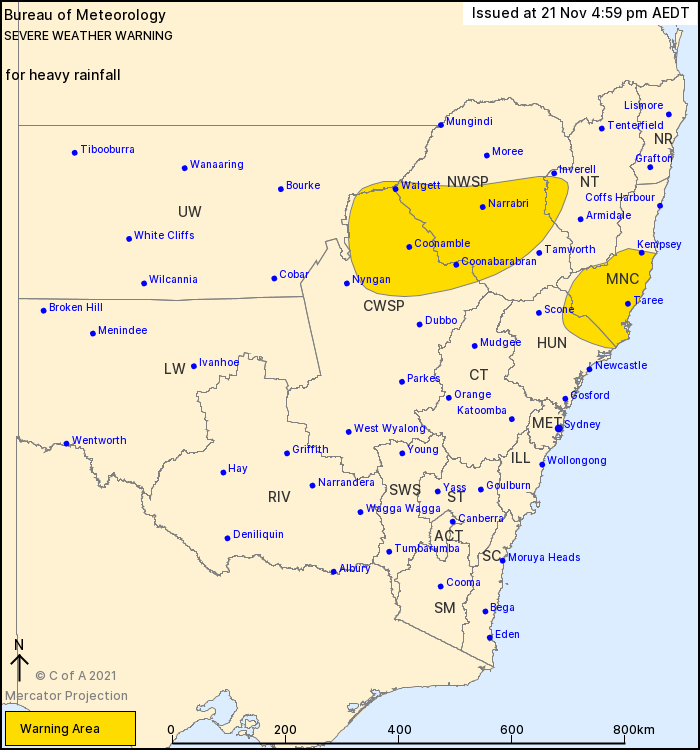