WIDESPREAD HEAVY RAINFALL AND FLOODING DEVELOPING ACROSS THE NORTHERN INLAND AND UPPER HUNTER FROM THURSDAY AFTERNOON.

Weather Situation:
A low pressure system will move eastwards from northeastern South Australia into New South Wales during Thursday. A trough will extend from the low into southern inland Queensland and will drift south into northern New South Wales during the day. An extremely moist airmass will be drawn southwards from the tropics ahead of these features, producing heavy rain areas and widespread thunderstorm activity across the region. Conditions will gradually clear from the west of the area during Friday morning.

Areas of HEAVY RAINFALL which may lead to flash flooding are forecast to become widespread over the Northwest Slopes and Plains, Northern Tablelands, Upper Hunter and Barrington Tops area during Thursday afternoon. Heavy falls may develop in western parts of the Northern Rivers overnight into Friday morning.

Severe thunderstorms may also develop and produce localised INTENSE RAINFALL which may lead to dangerous and life-threatening flash flooding, more likely in northern parts of the North West Slopes and Plains and Northern Tablelands. Six-hourly rainfall totals exceeding 100mm are possible with thunderstorms, which may also produce localised areas of damaging to destructive winds. Severe Thunderstorm Warnings will be issued if this threat eventuates.

Locations which may be affected include Armidale, Tamworth, Gunnedah, Moree, Narrabri and Parkes.

Severe weather is no longer occurring in the Southern Tablelands and Lower Western districts and the warning for these districts is CANCELLED. 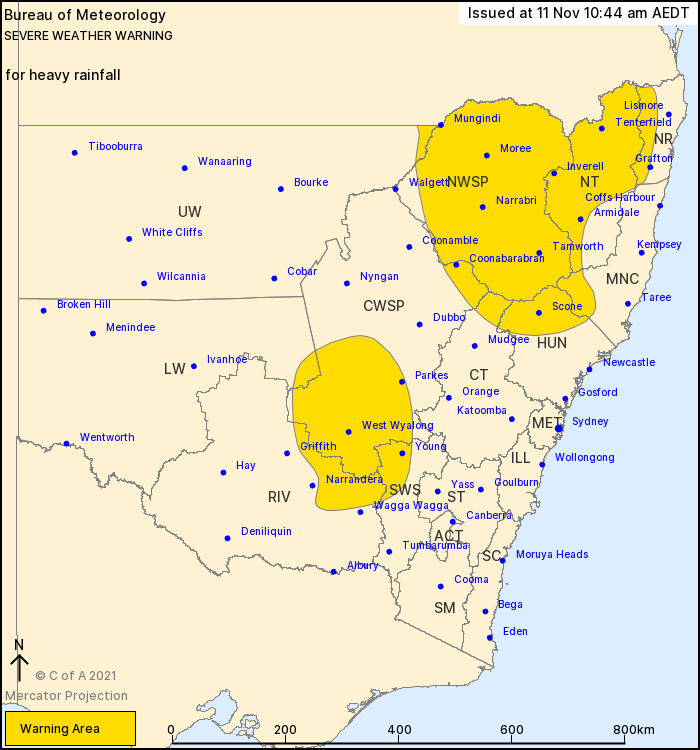