Weather Situation:
A low pressure system over northeastern South Australia will move eastwards into New South Wales during Thursday. A trough will extend from the low into southern inland Queensland and will drift south into northern New South Wales during the day. An extremely moist airmass will be drawn southwards from the tropics ahead of these features, producing heavy rain areas and widespread thunderstorm activity across the region. Conditions will gradually clear from the west of the area during Friday morning.

Areas of HEAVY RAINFALL which may lead to flash flooding are forecast to become widespread over the Northwest Slopes and Plains from Thursday morning, extending into the Northern Tablelands, Upper Hunter and Barrington Tops area during Thursday afternoon.

HEAVY RAINFALL also developing across the Central West Slopes and Plains and parts of the South West slopes late Thursday evening. Six-hourly rainfall totals exceeding 50 mm are possible.
Catchments are wet and widespread flooding is likely. This includes possible MAJOR
FLOODING for areas over the Northern Slopes. Refer to current flood warnings at http://www.bom.gov.au/nsw/warnings/
Locations which may be affected include Armidale, Tamworth, Gunnedah, Moree, Narrabri and Parkes. 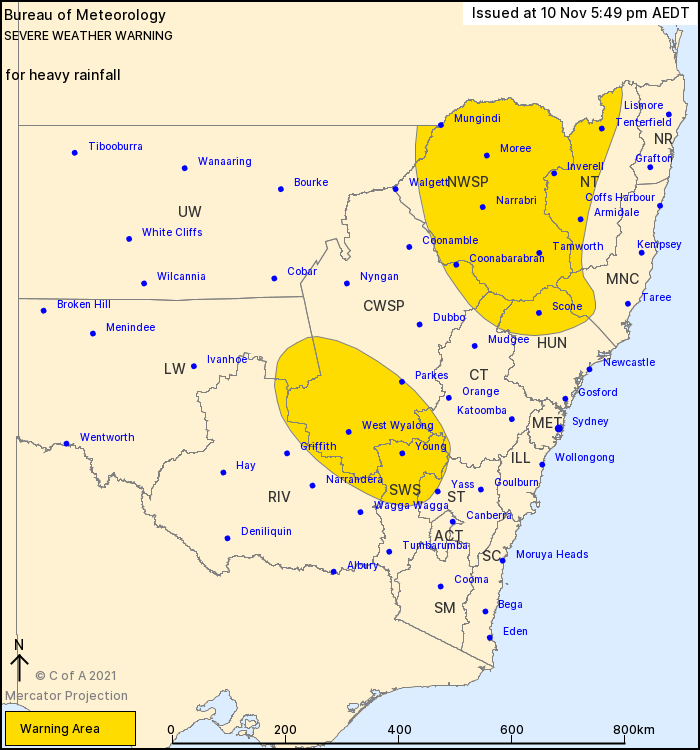