Weather Situation: A coastal trough is forecast to deepen into a low pressure system over coastal areas about the Mid North Coast later today in response to a significant upper trough and associated low. The low is expected to quickly shift off the east coast later this evening with drier and more stable air developing in its wake.

HEAVY RAINFALL which may lead to FLASH FLOODING will continue across the Mid North Coast and southeastern areas of the Northern Tablelands today. Six-hourly rainfall totals between 60 and 90 mm are likely with falls up 150 mm along the coast.

Locally INTENSE RAINFALL which may lead to DANGEROUS AND LIFE-THREATENING FLASH FLOODING is also possible over the Mid North Coast, most likely over areas between Bellingen, Nowendoc and Foster. Six-hourly rainfall totals in excess of 200 mm are possible, most likely with thunderstorms.

The most likely period for heavy, locally intense rainfall, is from early afternoon through to the evening.

Rainfall has the potential to create landslides and result in further riverine flooding.

DAMAGING WIND GUSTS with peak gusts in excess of 90 km/h are possible over coastal areas between Smoky Cape to Seal Rocks until around midnight. Damaging wind gusts may lead to debris on roads and provide the risk for trees toppling in softer and very saturated soils.

Various Flood Warnings and Watches are current, please refer to them at http://www.bom.gov.au/nsw/warnings/ and heed the advice of authorities.

Locations which may be affected include Coffs Harbour, Port Macquarie, Taree, Kempsey, Sawtell and Dorrigo.

Significant 24 hour rainfall to 8:30 am Wednesday: 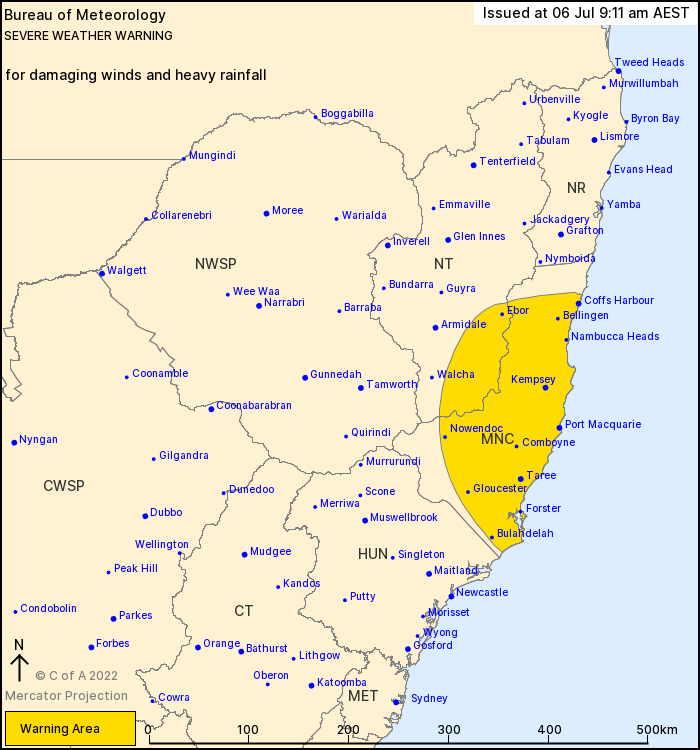