For people in Metropolitan, Illawarra and parts of Hunter and Central Tablelands Forecast Districts.

Weather Situation:
A surface trough is expected to deepen offshore from the Illawarra area today and move slowly northward over the remainder of the weekend, driving widespread showers and heavy rain along parts of the eastern coast of NSW. An East Coast Low may form within the trough during Sunday and linger until Monday, which will prolong this significant rainfall event across multiple days.

HEAVY RAINFALL which may lead to FLASH FLOODING is forecast for the Illawarra and Sydney Metropolitan districts, extending to the Hunter district over the weekend. Six-hourly rainfall totals between 70 to 120 mm are possible.

Strong to DAMAGING WINDS averaging 50 to 70 km/h with peak gusts up to 90 km/h are possible along the coastal fringe later on Sunday, continuing overnight.

A Flood Watch has been issued for coastal catchments from the Lower Hunter to the South Coast. A Severe Weather Warning for Damaging Surf is also current along parts of the central coastline. See http://www.bom.gov.au/nsw/warnings/.

Albion Park (Shellharbour Airport) recorded 242mm of rain over 24 hours up to 4.35pm. 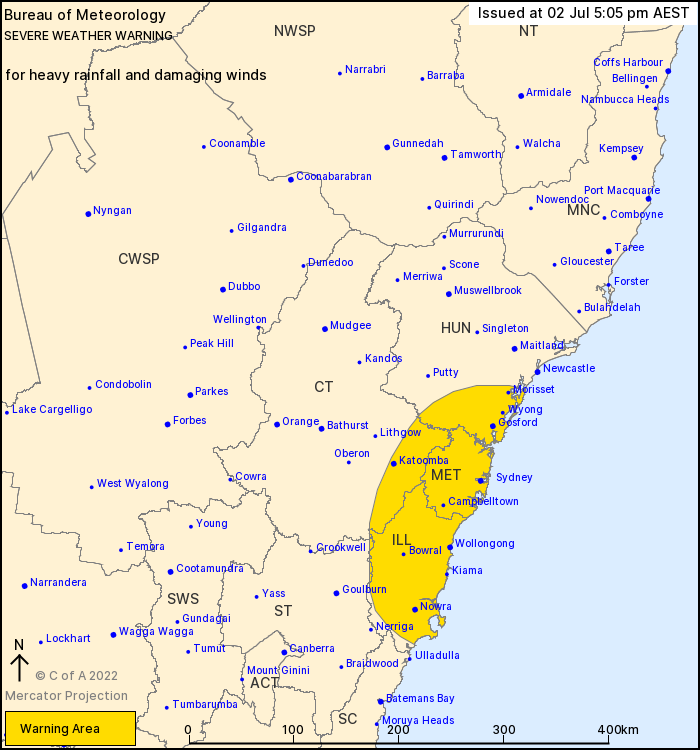