Weather Situation: A low offshore from the Mid North Coast will deepen and move towards the central New South Wales coast today. This system is forecast to weaken later this evening.

HEAVY RAINFALL which may lead to flash flooding is forecast to continue over parts of the Mid North Coast, Hunter, Metropolitan, Illawarra and Central Tablelands Forecast Districts before starting to ease later this evening. Six-hourly rainfall totals between 60 and 100 mm are possible.

DAMAGING WIND GUSTS with peak gusts in excess of 90 km/h are possible over parts of the coastal fringe in the warning area and are also possible with showers or thunderstorms.

A Severe Thunderstorm Warning will be issued if very dangerous thunderstorms with intense rainfall are detected.

A separate Severe Weather Warning is current for Damaging Surf south of Forster and Abnormally High Tides along the NSW coastline.

Locations which may be affected include Gosford, Sydney, Penrith, Parramatta, Wollongong, Nowra, Bowral and Campbelltown.

Severe weather is no longer occurring in the South Coast, Southern Tablelands, South West Slopes and Snowy Mountains districts and the warning for these districts is CANCELLED.

24 hour rainfall totals to 9 am this morning:

155 mm at Rossmore and Darkes Forest

145 mm at Faulconbridge and Shanes Park 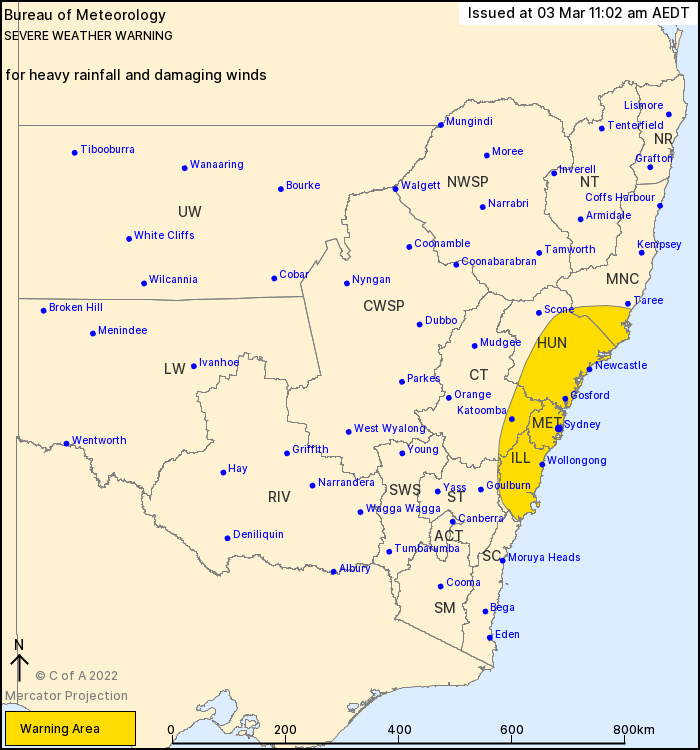