Weather Situation: A near stationary low offshore from the Mid North Coast will deepen and start moving towards the central New South Wales coast tonight. This system is forecast to weaken later on Thursday.

HEAVY RAINFALL which may lead to flash flooding is forecast to develop over parts of the Hunter and Metropolitan, Illawarra and parts of South Coast, Southern Tablelands and Central Tablelands Forecast Districts during Wednesday night and Thursday. Six-hourly rainfall totals between 80 and 120 mm are likely.

Locally INTENSE RAINFALL leading to dangerous and LIFE-THREATENING FLASH FLOODING is possible with thunderstorms with six-hourly rainfall totals in excess of 200 mm are possible.

A Severe Thunderstorm Warning will be issued if very dangerous thunderstorms with intense rainfall are detected.
Heavy rainfall increases the potential for landslides and debris across roads.

A separate Severe Weather Warning is current for Damaging Surf south of Forster and Abnormally High Tides along the NSW coastline.

Locations which may be affected include Gosford, Sydney, Penrith, Parramatta, Wollongong, Nowra, Bowral, Campbelltown, Batemans Bay, Braidwood, Bega and Moruya Heads.
86mm of rainfall recorded in the 6hrs to 3:45pm at Warragamba, with another 73mm recorded in the following 6hrs to 9:45pm 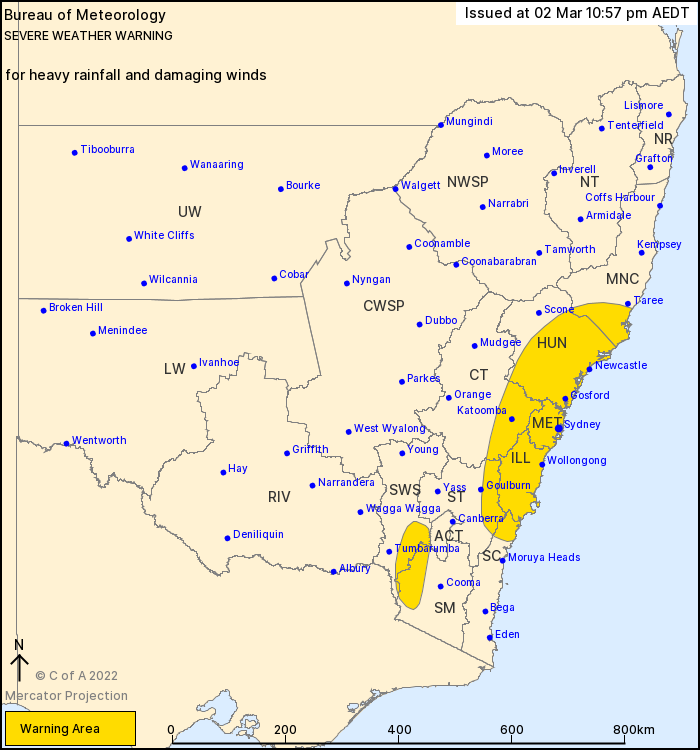