For people in South Coast and parts of Illawarra, Southern Tablelands and Snowy Mountains Forecast Districts.

Heavy rainfall and damaging wind gusts about the southern NSW coast due to a developing low pressure system offshore.

Weather Situation: A low pressure system is developing offshore of the south coast this morning and will intensify along the southern and central coast today in response to an upper level low. This system is expected to move out into the Tasman Sea on Saturday.

HEAVY RAINFALL which may lead to FLASH FLOODING is occurring over the warning area. Rainfall is forecast to continue while extending northward on Friday before easing into Saturday morning.

Six-hourly rainfall totals between 70 to 100 mm are possible, decreasing to 40 to 60 mm inland through the southern Snowy Mountains district. Isolated heavier falls are also possible with thunderstorms.

Locally DAMAGING WINDS averaging 65 km/h with peak gusts in excess of 90 km/h are possible over coastal areas and elevated terrain of the South Coast and southern Illawarra districts from Friday morning.

A Flood Watch is current for the South Coast. See http://www.bom.gov.au/nsw/warnings/ for more information.

Locations which may be affected include Nowra, Batemans Bay, Eden, Bega, Moruya Heads and Bombala.

97mm recorded in the two hours to 3:00am in the ranges immediately west of Moruya. 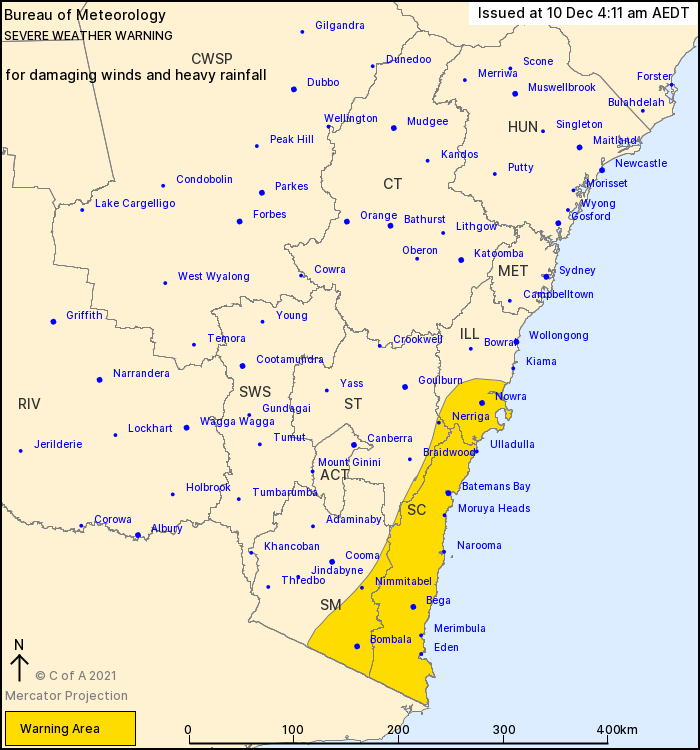