Weather Situation: A high pressure system lies over NSW, while a series of fronts move through the Southern Ocean today. The first of these fronts is forecast to pass to the south, resulting in strong and gusty west to northwesterly winds over the southeast of NSW and the ACT, most likely about elevated areas. Conditions are expected to ease briefly on Friday as the first front moves away, before re-invigorating on the weekend as another frontal system moves across the region.

DAMAGING WINDS, averaging 60 to 70 km/h with peak gusts in excess of 90 km/h are possible over the Snowy Mountains, and elevated parts of the South West Slopes and Australian Capital Territory Forecast Districts from Thursday morning.

DAMAGING WINDS, averaging 80 to 90 km/h with peak gusts in excess of 120 km/h are possible for Alpine areas above 1900 metres from Thursday morning.

Winds are expected to ease during the day on Friday, though the potential for damaging winds is expected to redevelop over a similar area on Saturday and Sunday.

BLIZZARDS are possible about Alpine areas above 1900 metres from Thursday morning, easing during Friday. The NSW National Parks and Wildlife Service recommends that back country travel be postponed until conditions improve.

Locations which may be affected include Thredbo, Perisher Valley, Charlotte Pass, Selwyn and Adaminaby. 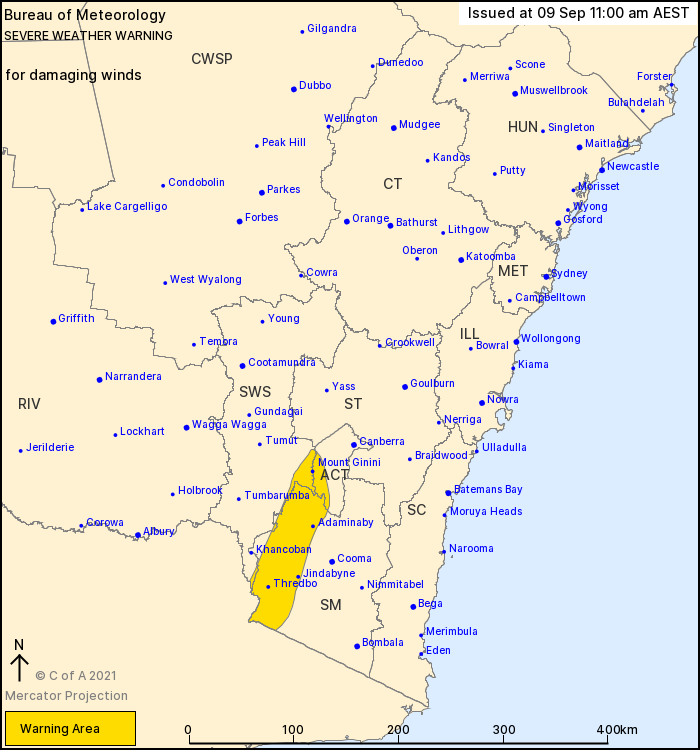