Severe thunderstorms are continuing to move south along the coast

Severe thunderstorms are likely to produce large hailstones and heavy rainfall that may lead to flash flooding in the warning area over the next several hours. Locations which may be affected include Lismore, Grafton, Casino, Kyogle, Yamba and Maclean.

The State Emergency Service advises that people should:
* Move your car under cover.
* Keep clear of creeks and storm drains.
* Don't walk, ride your bike or drive through flood water.
* If you are trapped by flash flooding, seek refuge in the highest available place and ring 000 if you need rescue.
* Be aware that run-off from rainfall in fire affected areas may behave differently and be more rapid. It may also contain debris such as ash, soil, trees and rocks.
* After bushfires, heavy rain and the loss of foliage can make the ground soft and heavy, leading to a greater chance of landslides.
* Unplug computers and appliances.
* Avoid using the phone during the storm.
* Stay indoors away from windows, and keep children and pets indoors as well.
* Stay vigilant and monitor conditions. Note that the landscape may have changed following bushfires.
* For emergency help in floods and storms, ring the SES (NSW and ACT) on 132 500. 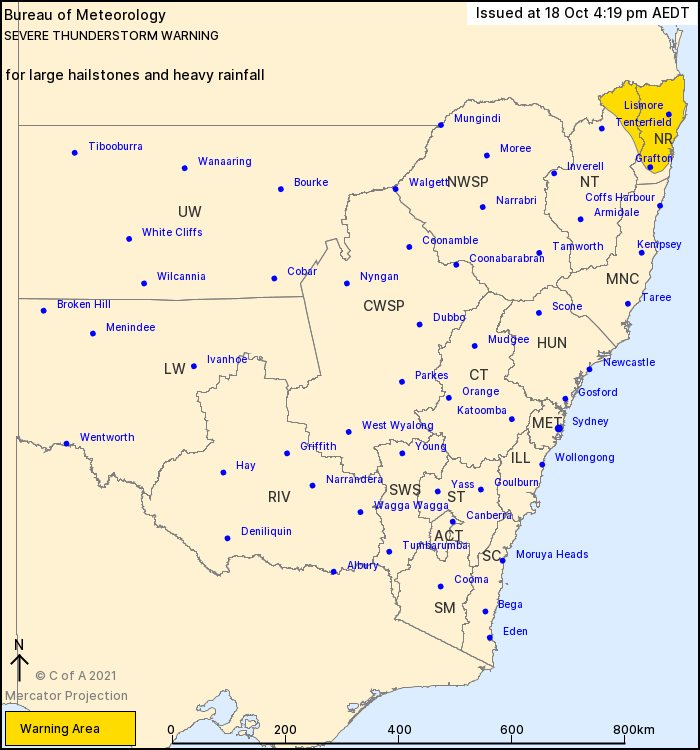