Weather Situation: A warm and humid airmass over the state, together with an approaching upper trough is resulting in severe thunderstorm activity this afternoon and evening.

Severe thunderstorms are likely to produce intense rainfall that may lead to dangerous and life-threatening flash flooding and damaging winds over the next several hours in parts of the Central West Slopes and Plains, Lower Western and Upper Western districts. Locations which may be affected include Cobar.

Severe thunderstorms are likely to produce damaging winds and heavy rainfall that may lead to flash flooding over the next several hours in the Upper Western and parts of the North West Slopes and Plains, Central West Slopes and Plains, Riverina and Lower Western districts. Locations which may be affected include Walgett, Coonamble, Nyngan, Cobar, Bourke, Wanaaring, Ivanhoe, Lightning Ridge and Brewarrina.

Severe thunderstorms are likely to produce damaging winds over the next several hours in parts of the Lower Western district. Locations which may be affected include Wentworth. 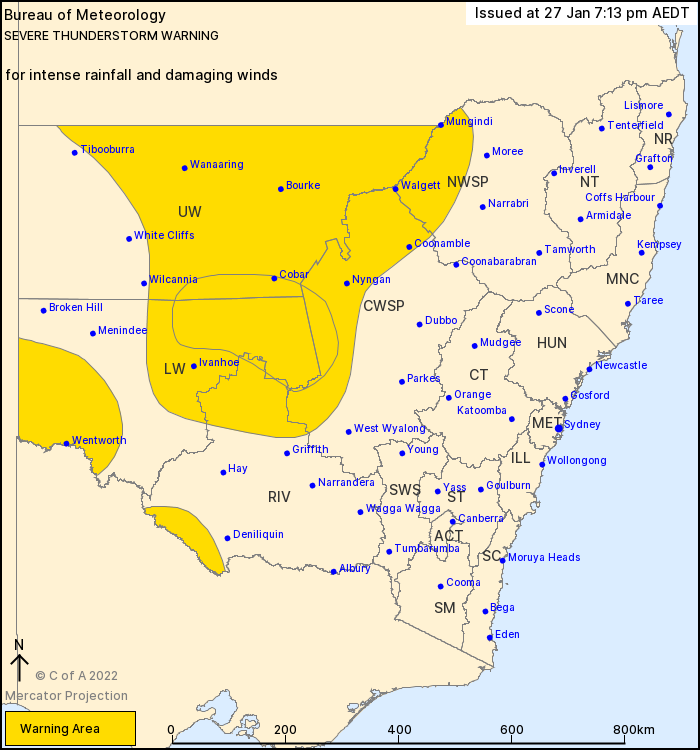