Heavy rainfall developing over the southeast, severe thunderstorms with heavy rainfall and damaging winds for parts of the Riverina and Lower Western districts.

Weather Situation: A trough interacting with humid air is producing multiple showers and the potential for embedded thunderstorms over the ACT and eastern New South Wales today. Another trough over the far western inland is slow moving bringing the risk of heavy rainfall with slow moving thunderstorms.

Severe thunderstorms are likely to produce heavy rainfall that may lead to flash flooding and damaging winds over the next several hours in parts of the Riverina and Lower Western districts. Locations which may be affected include Hay and Ivanhoe.

Severe thunderstorms are likely to produce heavy rainfall that may lead to flash flooding over the next several hours in parts of the Southern Tablelands, Snowy Mountains and Australian Capital Territory districts. Locations which may be affected include Cooma, Captains Flat, Tidbinbilla, Bredbo and Adaminaby.

Heavy rainfall has temporarily eased in the Northern Rivers and Northern Tablelands districts and the severe thunderstorm warning for these districts is CANCELLED. However, a Severe Weather Warning is still current for these areas and heavy rainfall remains a possibility.

The State Emergency Service advises that people should:
* Move your car under cover or away from trees.
* Secure or put away loose items around your house, yard and balcony.
* Keep at least 8 metres away from fallen power lines or objects that may be energised, such as fences.
* Report fallen power lines to either Ausgrid (131 388), Endeavour Energy (131 003), Essential Energy (132 080) or Evoenergy (131 093) as shown on your power bill.
* Trees that have been damaged by fire are likely to be more unstable and more likely to fall.
* Keep clear of creeks and storm drains.
* Don't walk, ride your bike or drive through flood water.
* If you are trapped by flash flooding, seek refuge in the highest available place and ring 000 if you need rescue.
* Be aware that run-off from rainfall in fire affected areas may behave differently and be more rapid. It may also contain debris such as ash, soil, trees and rocks.
* After bushfires, heavy rain and the loss of foliage can make the ground soft and heavy, leading to a greater chance of landslides.
* Unplug computers and appliances.
* Avoid using the phone during the storm.
* Stay indoors away from windows, and keep children and pets indoors as well.
* Stay vigilant and monitor conditions. Note that the landscape may have changed following bushfires.
* For emergency help in floods and storms, ring the SES (NSW and ACT) on 132 500 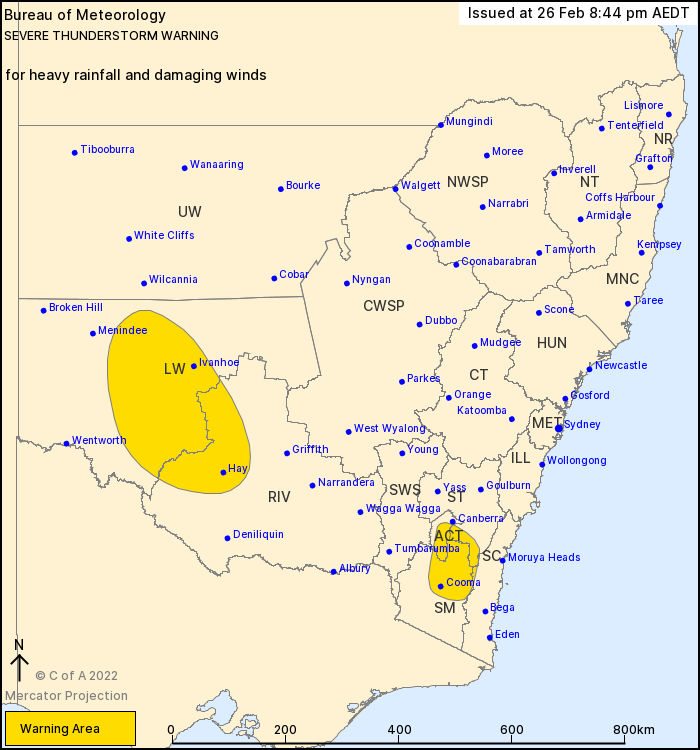