Heavy rainfall developing over the far northeast, severe thunderstorms with damaging winds and heavy rainfall for parts of the Riverina and Lower Western districts.

Weather Situation: A trough interacting with humid air is producing multiple showers and the potential for embedded thunderstorms over eastern New South Wales today. Another trough over the far western inland is slow moving bringing the risk of heavy rainfall with slow moving thunderstorms.

Severe thunderstorms are likely to produce heavy rainfall that may lead to flash flooding over the next several hours in parts of the Northern Rivers and Northern Tablelands districts. Locations which may be affected include Tweed Heads, Murwillumbah, Hastings Point, Numinbah, Tyalgum, Mullumbimby, Byron Bay, Kyogle, Brunswick Heads, Urbenville, Wiangaree and Nimbin.

Severe thunderstorms are likely to produce damaging winds and heavy rainfall that may lead to flash flooding over the next several hours in parts of the Riverina and Lower Western districts. Locations which may be affected include Hay, Ivanhoe and Balranald. 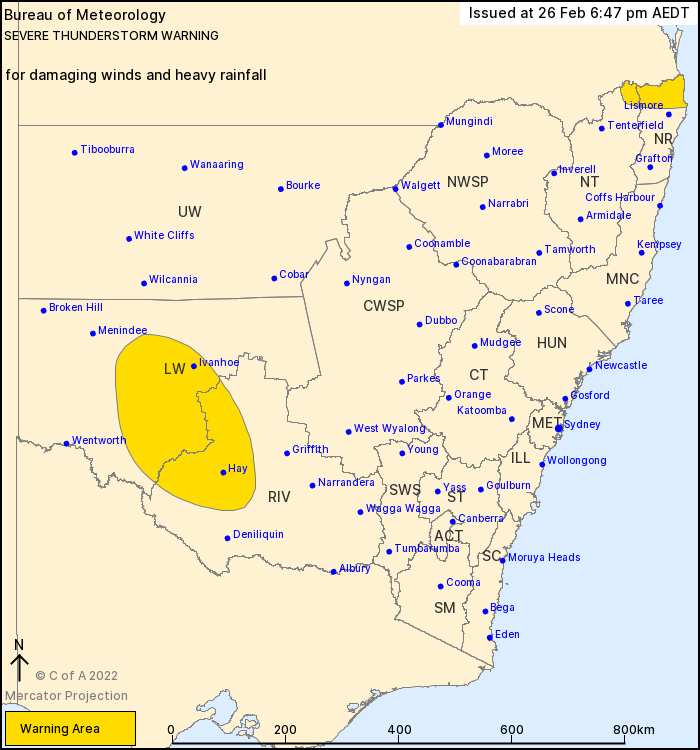