Issued at 5:56 pm Wednesday, 22 December 2021.
Heavy and slow-moving thunderstorms about the northeast, tending more mobile and gusty out west.

Severe thunderstorms are likely to produce damaging winds, heavy rainfall that may lead to flash flooding over the next several hours in the Northern Rivers and parts of the Mid North Coast, Hunter, Central Tablelands, North West Slopes and Plains, Central West Slopes and Plains and Northern Tablelands districts. Large hailstones are possible with thunderstorms in the Hunter. Locations which may be affected include Lismore, Grafton, Coonabarabran, Casino, Kyogle and Maclean.

Severe thunderstorms are likely to produce damaging winds over the next several hours in parts of the Central West Slopes and Plains and Upper Western districts. Locations which may be affected include Nyngan, Cobar, Bourke, Wanaaring, Tilpa and Fords Bridge.

Severe thunderstorms are no longer occurring in the Lower Western district and the warning for this district is CANCELLED.
A gust to 94km/h was observed at Coonabarabran Airport at around 1pm this afternoon. 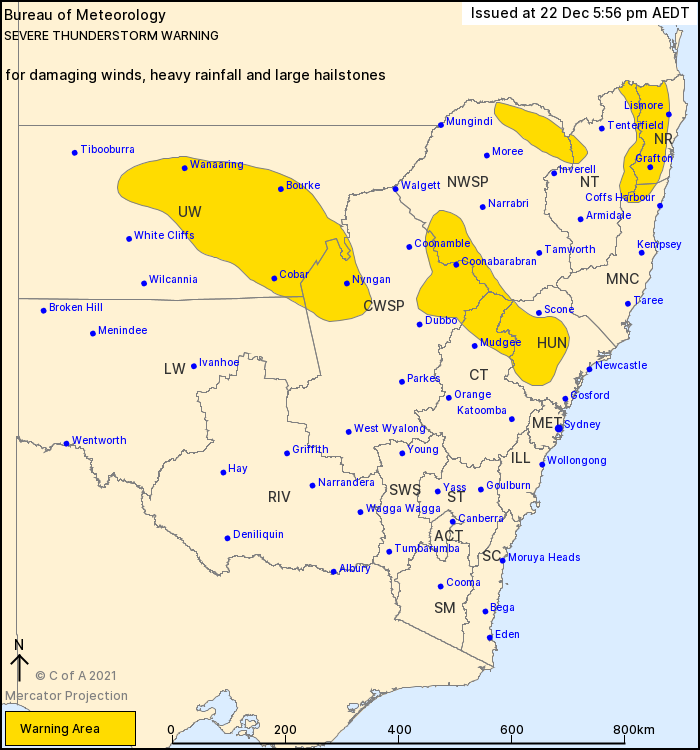