Issued at 5:06 pm Sunday, 19 December 2021.
Gusty thunderstorm activity over the eastern half of the state.

Weather Situation: A cold front and pre-frontal trough is combining with a strong upper level trough to aid extensive thunderstorm activity across the state. This activity will contract eastward this afternoon and evening.

Severe thunderstorms are likely to produce damaging winds over the next several hours in the Central Tablelands and parts of the Illawarra, Southern Tablelands, Central West Slopes and Plains and South West Slopes districts. Locations which may be affected include Orange, Mudgee, Bathurst, Katoomba, Dubbo and Parkes.

Severe thunderstorms are likely to produce damaging winds and heavy rainfall that may lead to flash flooding over the next several hours in the Snowy Mountains and parts of the South Coast districts. Locations which may be affected include Eden, Cooma, Bombala, Thredbo, Nimmitabel and Khancoban.

Severe thunderstorms are no longer occurring in the Riverina and Australian Capital Territory districts and the warning for these districts is CANCELLED. 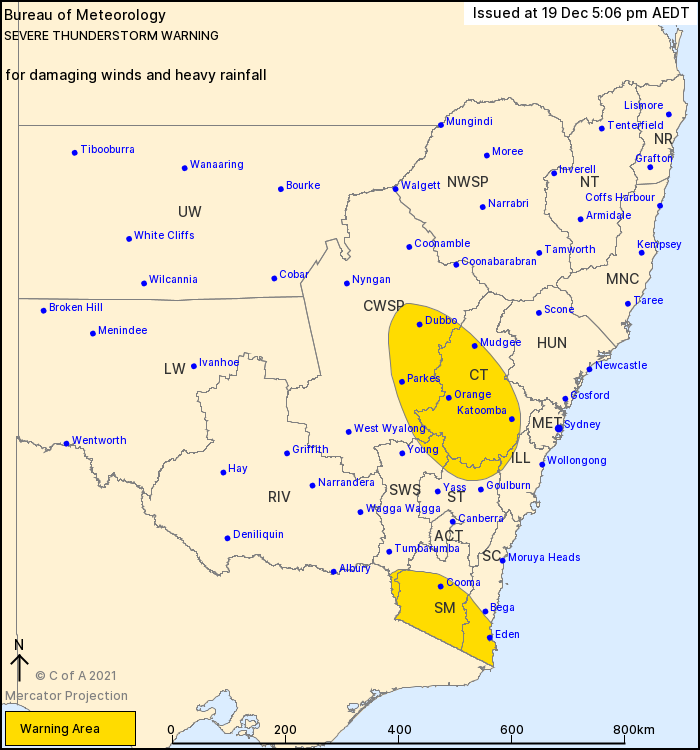